In honor of Valentine’s Day, this is the last in a series of three love stories, featuring artists in the Snapshot exhibition—Pierre Bonnard, Henri Evenepoel, and Edouard Vuillard—and the ladies they loved. We conclude our tribute to the love lives of Snapshot artists with the three women Vuillard featured prominently in his work.

Poor Edouard Vuillard. Never married, Vuillard always seemed to fall for unattainable (read: married) women and lived with his mother until she passed away in his sixties. While it’s safe to assume he had some mother issues, he was by no means Norman Bates from Psycho. Vuillard was quiet and reserved. He preferred to be among close family and friends. His introverted personality informed the small but exquisitely patterned interior and exterior scenes depicted in his paintings and photographs. Vuillard often portrayed those closest to him, and the majority of his works in Snapshot are populated by three women who captured his heart: Misia Natanson, Lucy Hessel, and his mother.

Vuillard’s first romantic inspiration was Misia Natanson. Misia was an “it” girl of 1890s Paris and an accomplished pianist. Married to publisher Thadée Natanson who featured prints by artists including Vuillard and Bonnard in his journal La revue blanche, Misia charmed her way effortlessly through artistic circles. Vuillard became enamored of her around 1895, and soon these feelings dominated his work. She is a main focus of both his paintings and photographs from the 1890s like the ones below.

At the time of his association with the Natansons, Vuillard had only recently begun to experiment with photography, and he found in Misia a willing subject with whom to explore the medium. He loved to pose her in lavish interiors and dramatic compositions, playing with decorative patterns and shadows. He captured her flirtatious nature in outdoor settings as well. Even when her husband is in the picture, Vuillard’s focus is on Misia and her youthful exuberance. She seems to relish the attention, perhaps giving in a bit to Vuillard’s admiration for her. On Christmas Eve in 1896, Vuillard wrote of his feelings for Misia: “Tenderness, desires of work, ambitions and sensualities . . . Uncertainty and conflicting desires. An abundance of memories.”

Vuillard’s infatuation with Misia soon waned. Perhaps she was too outgoing and forward for the reserved artist? Misia seems like she was extremely high-maintenance, and maybe Vuillard grew tired of her constant vogueing, like an 1890s version of Madonna. Kidding aside, Misia most likely disappeared from Vuillard’s work because Thadée’s La revue blanche was in financial trouble by the turn of the century, which caused Vuillard to change his social circle and, soon after, the object of his affection.

In 1900, he met Lucy Hessel, wife of his dealer Jos Hessel. Lucy and Vuillard would have an intimate relationship for the next 40 years. Lucy quickly replaced Misia as the focus of Vuillard’s romantic eye, although Vuillard often captured her in poses similar to Misia’s. Take a look at the pairing above. Vuillard has snapped a photograph of Lucy, lounging by a window, her face looking off to the right, which echoes his earlier composition of Misia. While the photos are similar in their staging, Vuillard’s renderings of Lucy are softer and more intimate than those of Misia. There are no dramatic shadows in the Lucy photograph It seems Vuillard has captured her in a private moment of relaxation and reflection. The photographs of Misia are punctuated by her outgoing, flirtatious personality and dramatic poses. The photographs of Lucy reveal private moments in a relationship sustained over 40 years.

Although their relationship was at times tempestuous, Vuillard’s photographs of Lucy capture quiet, peaceful moments of their partnership. Many depict Lucy outdoors at picnics, relaxing on visits to the country, and seated in the company of friends. The most personal images capture her in unguarded moments, like the photos of her in Amfréville, seen above. In the photo at left, Lucy is reclining in a chair outdoors, her eyes meeting those of her admirer. In the photo at right, she leans against a haystack. This is an intimate moment between Lucy and Vuillard–they are seated so close together that the artist’s foot can be seen  right next to Lucy’s leg in the lower right corner of the frame. Tres risqué, non?

Despite Misia and Lucy’s prominence in his photographs and paintings, Madame Vuillard–the artist’s mother–was the only woman he called his muse. He began his career painting domestic scenes of her and continued to capture her lovingly in his art for the rest of her life.

In his early photos of her, Vuillard captures his mother in powerful, dominant positions. She is the central figure of many a composition, whether cooking in her kitchen, reading the newspaper, or sewing in a chair. Her presence dominates the frame, causing other figures, like Vuillard’s poor sister Marie, to recede into the background, as seen in his well-known painting Interior, Mother and Sister of the Artist from 1893 (above right). In the painting, Madame Vuillard, dressed all in black, commands attention while Marie is relegated to the side where she nearly blends into the wallpaper. Paintings like this illustrate just how central Vuillard’s mother was not only in his life, but in his work as well. Besides cooking, cleaning, sewing, and providing creative inspiration, Madame Vuillard often developed her son’s photographs for him. Good luck living up to that example, Lucy and Misia! Seriously, no wonder Vuillard never found a comparable “muse.” 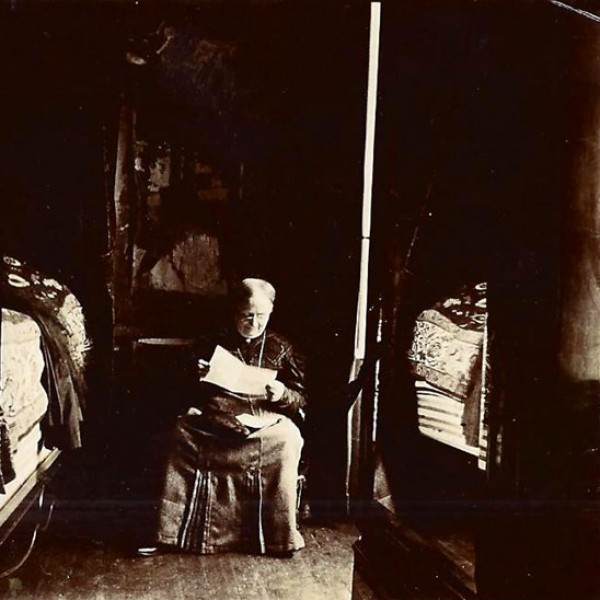 As Madame Vuillard aged, Vuillard was there to capture her transformation. She becomes softer, less dominant, and, in a way, more human in these later photographs, like the one below taken shortly before her death. She is shown seated on her bed, smiling, toothless, bald, and frail. These photos help one understand Vuillard’s unending devotion to his mother. While she commands his attention in earlier works, these later photographs show her powerless but no less loved and respected by her beloved son. 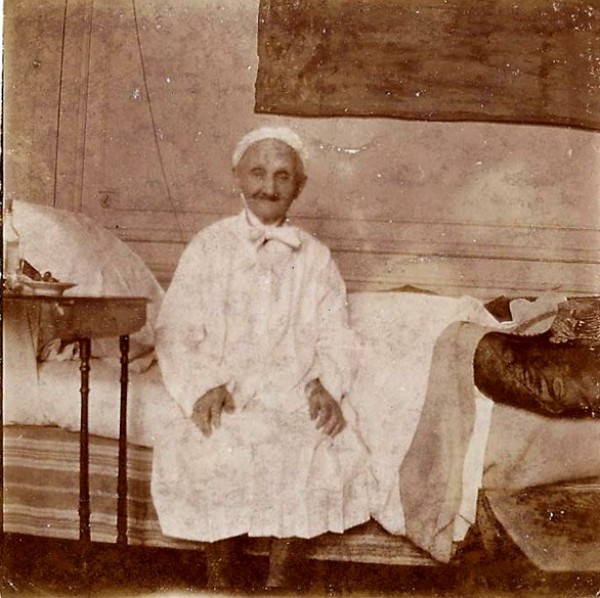 As evidenced in these photographs and paintings, love takes many forms for the artists in Snapshot. Whether for a girl with mysterious origins, a cousin, a married woman, or a mother, love provided endless inspiration.

One thought on “A Boy’s Best Friend is His Mother: Misia, Lucy, and Mom in the Lens of Vuillard”