Chief Curator Eliza Rathbone describes Henri Rivière’s photographs and prints of the then-brand-new Eiffel Tower on the Snapshot exhibition audio tour. Rivière will be the subject of gallery talks at the museum at 6 and 7 pm tonight as part of Phillips after 5. 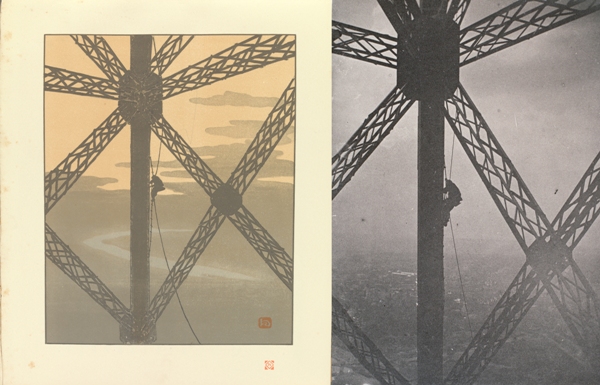 Just as the Eiffel Tower was being completed Henri Riviere and several friends were invited by Gutave Eiffel to climb inside it to the top and to experience its thrilling modernity and dizzying heights. That he recorded this experience in photographs was utterly unknown for many years. It was not until the 1980s that the existence of these remarkable snapshots from that moment in 1889 came to light. Instead we knew Rivière’s response to the Eiffel Tower through his series of
prints published as the Thirty-Six Views of the Eiffel Tower, a volume in an edition of 500 that paid homage to the new structure—a structure that was and remained for some time the tallest in the world.

Rivière was a collector of Japanese art and owned over 800 woodblock prints, which were the rage in Paris at the time. All the artists in the present exhibition admired the art of Japan—especially the prints of Hokusai and Hiroshige—but they drew on it in different ways. Here we see Rivière making homage not only to the Eiffel tower but at the same time to Hokusai whose Thirty-Six Views of Mount Fuji were well known to aficionados. Just as Fuji could be admired from countless angles and perspectives and seen from near and far, so the Eiffel Tower dominated Paris whether on a far horizon or close up. But most thrilling are the views from
inside the structure itself, views that we might imagine invented were we not privileged to see the actual photographs Rivière made. Looking down on Paris through its silhouetted iron girders we are reminded of what a thrill it must have been to see the city from such heights for the first time. While anticipating twentieth-century photographers like Alexandr Rodchenko and Lewis
Hine, Rivière also included in some images the brave engineers working on the tower, heroically bringing Eiffel’s vision to completion.