Join us on June 10 for a Duncan Phillips Lecture featuring Arlene Dávila, who will discuss her book Latinx Art: Artists, Markets, and Politics (2020), as well as The Latinx Project at New York University, an interdisciplinary center that promotes Latinx culture. 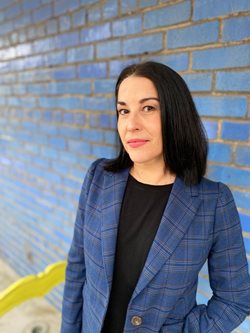 In her book Latinx Art, Arlene Dávila poses this question: “What is Latinx art? How does it relate to American art? Why don’t we know more about Latinx artists, and why should we care?” Particularly important questions given that “these artists have been central to the artistic vitality of the United States thought they remain largely eclipsed from its history. They are the largest majority missing from most museum collections and commercial gallery circuits, a self-perpetuating omission that affects the evaluation of Latinx artists into the future.”

The term Latinx refers to artists from a Latin American background in the US, whether they are first generation or have a longer history of living and working in the country. The term also points to an openness to gender, sexual, and racial inclusivity. “I define Latinx art as a project, not a fixed identity,” writes Dávila, “a project of culture making.” Furthermore, “Latinx points to the urgent need to raise questions and to call attention to the silencing of Latinx artists and communities.” Dávila considers herself part of this movement and calls for greater Latinx visibility. Dávila explores how Latinx artists are overlooked and marginalized because of their lack of “national privilege”—they do not have citizenship to a Latin American country, but instead are living as diasporic artists within the United States. These artists are often confused with Latin American artists and because of that often experience erasure. Dávila explains:

“Latinx,” “Latin American,” and even “American” art are not fixed, homogenous, or universally accepted terms. These categories are specially contested in the art world, where any hyphenated art has long been regarded as less genuine, less creative, and of generally lower quality and value, than “unmarked” art. Art and aesthetic are ruled by their own set of blinders. Essential here is the idea that matters of identity and history are irrelevant even when they are intrinsically involved in the creation of value. Hence, we seldom recognize race in categories such as “American art” and “Contemporary art” that index whiteness, while “Latinx art” or “Black art” cannot be read apart from signifiers of race. All the while, “contemporary art” and “American art” remain uncontested, made-up, and homogeneous categories that hide more than they reveal. The sale of Leonardo da Vinci’s five-hundred-year-old painting Salvator Mundi at Christie’s 2017 postwar and contemporary art sales, on account of its “contemporary significance,” is a perfect example of the market-driven malleability of the category of “contemporary art.” Still, the dominant art world regularly accepts these made-up determinations and categories. By contrast, “ethnic” categories such as Latinx art are always bemoaned, supposedly for “erasing complexity,” especially when used to identify and gain recognition for artists of color. The racial politics of the art world become normalized through these unequal assessments and through the racialization of selected categories while “the mainstream” continues to signal “white” as the norm. This explains why many curators and artists of Latinx, African American, Caribbean, and Latin American art bemoan these categories as “necessary evils.” Everyone recognizes that these categories ghettoize artists into sectors apart from the white-dominant center, yet at the same time they have opened up spaces that would have otherwise remained even more exclusive and inaccessible.