Rashad Robinson (@rashadrobinson), President of Color of Change and spokesperson for Voting While Black, reflects on Jacob Lawrence’s Struggle series. Jacob Lawrence: The American Struggle is on view through September 19, 2021. 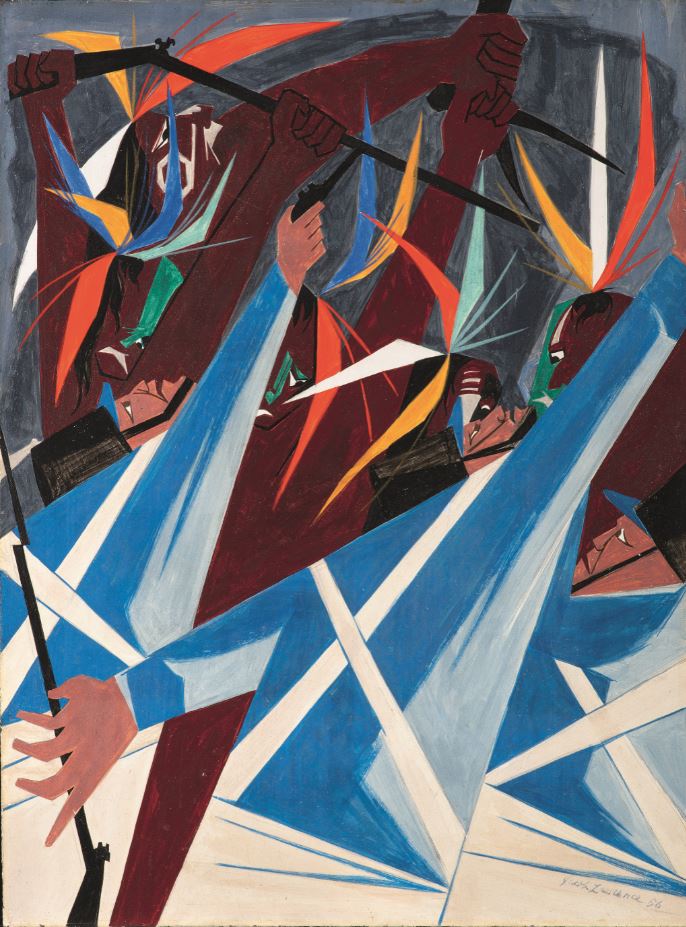 Jacob Lawrence, Panel 21, Listen, Father! The Americans have not yet defeated us by land; neither are we sure they have done so by water—we therefore wish to remain here and fight our enemy…—Tecumseh to the British, Tippecanoe, 1811, Egg tempera on hardboard, 16 x 12 in.; From Struggle: From the History of the American People, 1954–56, Collection of Harvey and Harvey-Ann Ross © 2021 The Jacob and Gwendolyn Knight Lawrence Foundation, Seattle / Artists Rights Society (ARS), New York

Jacob Lawrence’s bold vision on display in The American Struggle is the kind of art we need for this time in our country’s history. As our movements are seeking to retell the story of America more honestly and through a broader diversity of perspectives, the narratives depicted in his works of art play a pivotal role in helping educate people from diverse demographic backgrounds. I’ve been an avid fan of Lawrence’s work for decades because of how he counters this past by painting an inclusive depiction of the collective “American Struggle.” Lawrence is able to convey the lives, stories, and experiences of America’s forgotten forefathers in addition to a variety of our nation’s underrepresented episodes. Given the current climate, it’s now more important than ever that The American Struggle is on display. The notions of slavery, exploited labor, racism, and white supremacy are often swept under the rug while we are continuously force-fed this hyper-unrealistic portrayal of our nation’s tumultuous and troubled past through paintings that ultimately amount to propaganda. Ultimately, Lawrence’s exhibit is a quintessential form of American art—one that actively seeks to shy away from the status quo in the pursuit of a more comprehensive, accurate, and human depiction of the ever-growing American ethos and journey today.