2021-22 Sherman Fairchild Fellow Shiloah Coley speaks with Mojdeh Rezaeipour about her video work in The Phillips Collection’s 100th anniversary Juried Invitational Inside Outside, Upside Down. 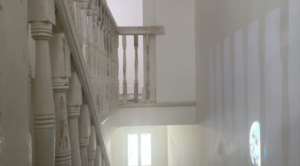 Still from watching time watching god, Courtesy of the artist

Mojdeh Rezaeipour’s video felt momentarily complete for the first time as she viewed it at the opening of Inside Outside, Upside Down at the Phillips with former neighbors, who are now dear friends.

“We were all able to witness it together,” said Mojdeh.

Mojdeh’s meditative video, watching time watching god, documents the way time passes. She tracks light moving across the wall and the moon in the sky. Using projection mapping, she captures what’s happening outside the window and projects it onto a different surface of the house, making an imprint. She describes it as having a conversation with the house. 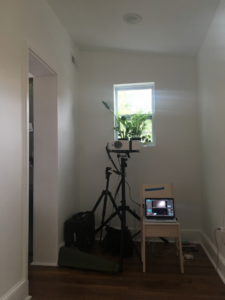 Behind the scenes of capturing the footage of watching time watching god, Courtesy of the artist

“For me, it felt like I’m telling the wall something—about what another part of the house experienced.” These aren’t the conversations she imagined having at the beginning of 2020.

As a resident artist at The Nicholson Project, Mojdeh proposed an on-site activation, allowing her to get to know her new neighbors in Southeast DC. Conscious of her positionality as a non-Black person of color applying to a residency in a quickly gentrifying DC, she sought to learn from community members in the predominantly Black area. “I wanted to somehow make my work a container for what was already there instead of just bringing my work there.”

Just as the city went into lockdown in March 2020, Mojdeh began The Nicholson Project’s Artist Residency Program. The residency welcomes artists from all creative disciplines who are especially interested in the role that art and design can play in strengthening the community to reside there for three months. As Mojdeh moved in, the world around her was closing down. A common occurrence for us all over the past 18 months, she found herself struggling to meet people. From scheduling Zoom teas to trying to make eye contact with folks on the street, she did all she could to connect.

Then, she found an unlikely answer through a different kind of connection right in front of her. 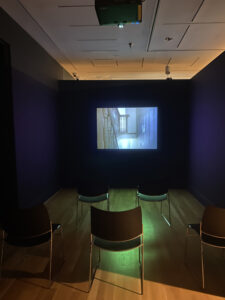 watching time watching god, 2020, Video, Courtesy of the artist, on view in Inside Outside, Upside Down

“It’s like—oh, okay, while I’m trying to have conversations with my neighbors, I’m also having a conversation with the house,” said Mojdeh. “The house is the most accessible entity with whom to have a conversation.”

As she bore witness to time passing in and around the house, the constant sounds served as a soundtrack of her time there and also the audio for the video. The typical sounds of a DC neighborhood—birds chirping, dogs barking, and helicopters overhead—serve as a steady hum throughout the piece. But it’s the ambulance sirens that might catch a listener by surprise. The home for the residency sits next to a highway that leads to a hospital. “The ambulance sirens were a reminder of the massive collective grief that we’re needing to process,” Mojdeh said.

After the police murder of George Floyd and the following uprisings and protests, she felt pretty clearly that this was not the time for her to have an exhibition. She held onto the work and shared the footage with a handful of neighbors who had become her good friends. 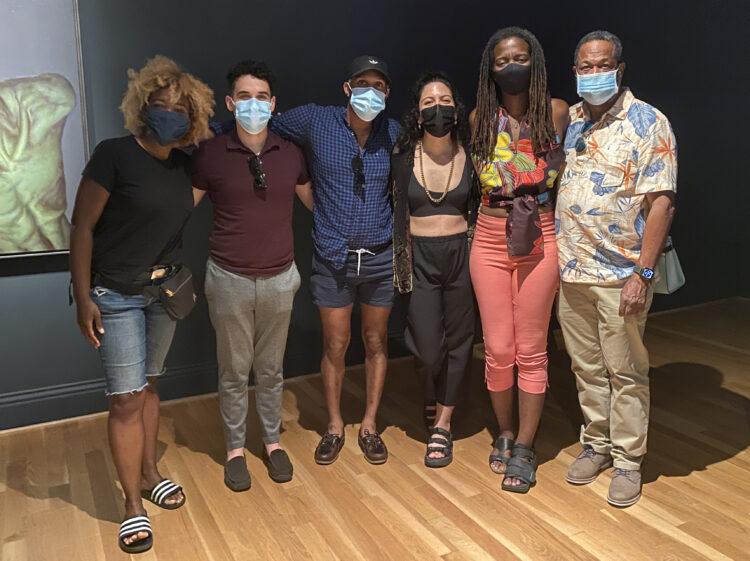 Rezaeipour with friends and fellow artist Nekisha Durrett at the opening of Inside Outside, Upside Down, Courtesy of the artist (Left to right: Nekisha Durrett , John, Seth, Mojdeh Rezaeipour, Gayle, and Kendall)

These same friends were able to join her at the opening of Inside Outside, Upside Down, the first public showing of the piece. “The work that we make is just as much about what is not visible as what is visible. And what is not visible but lives at the heart of the work I made in this exhibition are these relationships.”

Mojdeh continues to build relationships as she tackles a new research-based project centered on ancient pottery fragments originating in over 30 different sites across the Middle East. The project builds toward a collective project informed by conversations with artists and humans with lineages across all of the sites.

May we keep in mind the presence of those who might be physically absent.