Alma W. Thomas and David Driskell were an integral part of the creative and cultural scene in Washington, DC, for decades. Learn more about their journeys in art through our program with Howard University on November 13, which will focus on Spirituality, Howard University, Identity, and Thomas and Driskell’s art in dialogue. 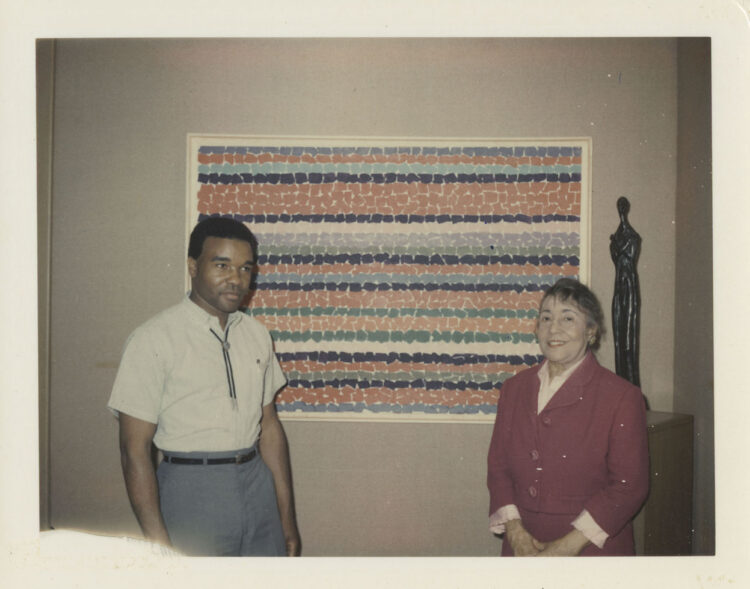 Alma W. Thomas and David Driskell were close friends for decades. Both migrated from Georgia, settled in Washington, DC, and attended Howard University, though decades apart. Moving in similar professional and social circles, their paths often converged. In 1953, they were introduced at the Barnett Aden Gallery (the first Black-owned art gallery in the United States), located near Howard, which Thomas helped manage. The day they met, Driskell, who worked at the gallery, brought in a one of Thomas’s paintings from her car, and she tipped him for his efforts. They spoke about their backgrounds, who they knew, and their friendship began. Together, they frequented galleries and museums like The Phillips Collection, and they exhibited their work as part of the local arts scene. They kept in contact through studio visits and constant correspondence.

For Thomas’s first solo show at Howard in 1966, Driskell wrote that her art revealed “her love of life.” Five years later, Driskell curated her show at Fisk University in Nashville, where he was the chair of the art department. For Thomas: “The opening of my exhibition was . . . one I will always cherish. Such joy!” That same year, officials at the Whitney Museum of American Art in New York responded to protests over the museum’s limited inclusion of African Americans by agreeing to present a series of solo shows of Black artists. During this time, Whitney curator Robert Doty corresponded with Driskell, and he recommended the Thomas to Doty, leading to Thomas’s exhibition at the Whitney in 1972 that brought her national acclaim. In 1976, Driskell featured her art in his pioneering show Two Centuries of Black American Art which debuted at the Los Angeles County Museum of Art then toured the country.

Their friendship only strengthened with time, as they updated one another on their art and plans for future visits. Driskell wrote: “I am quite anxious about seeing the new paintings that you have done . . . [S]ending warm regards and I do look forward to seeing you.” After Thomas’s passing, Driskell said “her indomitable spirit was now free to roam the order of perfection where color and form . . . reign.”