Robert Gates and the American University art faculty who taught Alma Thomas between 1952-1957 were closely associated with The Phillips Collection, and its former art school, managed by C. L. Watkins. The relationship began when museum founder Duncan Phillips hired Watkins as the institution’s first director of education. Together, they increased The Phillips Collection’s presence in the city, generated extensive relationships, and expanded the museum’s impact through the development of new programs. They engaged with the DC art scene and offered opportunities to burgeoning artists in the city. Watkins organized art classes at the Phillips from 1930-32, and he led the Phillips Gallery of Art School, which Gates attended. When the school became independent in 1933 and renamed the Studio House, Watkins hired Gates as an assistant; a year later, he became an art instructor. Phillips created the Washington Room, two galleries devoted to living artists working in the DC; there, the art of Watkins and Gates was frequently on view. 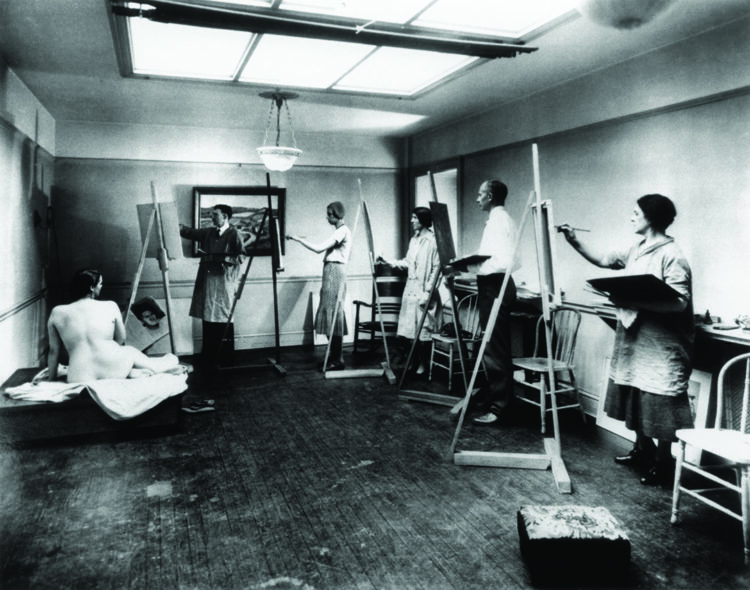 During the 1930s, as regional chairman of the federal government’s relief program, the Public Works of Art Project, Phillips focused on encouraging local artists. He believed: “US artists of talent who have been unknown or neglected … [need] sustained support from their own museums and fellow citizens.” After federal funding for the program ended, Phillips continued to champion arts in the region, and in 1935 presented Autumn Exhibition Selected from the Work of Artists from Washington, Virginia, Maryland. It featured several artists Phillips promoted while PWAP regional chair, including Watkins, Gates, and Sarah Baker, another of Thomas’s teachers. Thomas probably saw the show because it was on view when she and a group of DC public school art teachers toured the Phillips that fall. A year later, Phillips purchased the watercolor Potomac River Ice Breaker from Gates’s show held at the Studio House and amassed a significant collection of the artist’s work. 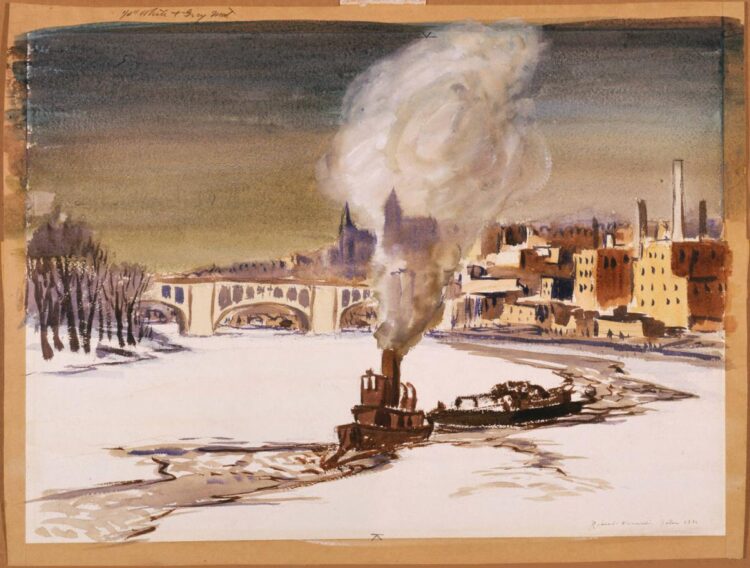 In the 1940s, Watkins became chair of AU’s art department, and his students divided their time between academic courses at the university and drawing and painting classes at the Phillips. During Watkins’s tenure and after, AU staffed its art department and gallery with former Phillips Art School alums and associates like Gates, who joined the faculty in 1946. As a student of Gates at AU in 1952, Thomas’s education in part came from her teacher’s training and a close study of the modern art on display at the Phillips.

Gates found exhibition opportunities at the Phillips. In 1952, he was invited to participate in a local artist show at the museum. It featured work by Thomas’s teachers at AU, like Jacob Kainen, along with other artists working in the area. Thomas most likely attended the exhibition. From that show, Phillips purchased Gates’s painting Fish for $300, which was later lent to Barnett Aden’s 10th Anniversary exhibition in 1953. Thomas, who was vice president of Barnett Aden, the first Black owned, commercial art gallery in the US, would have attended the exhibition’s opening, where she may have even seen Gates, the Phillipses, and other museum staff who frequented the gallery. 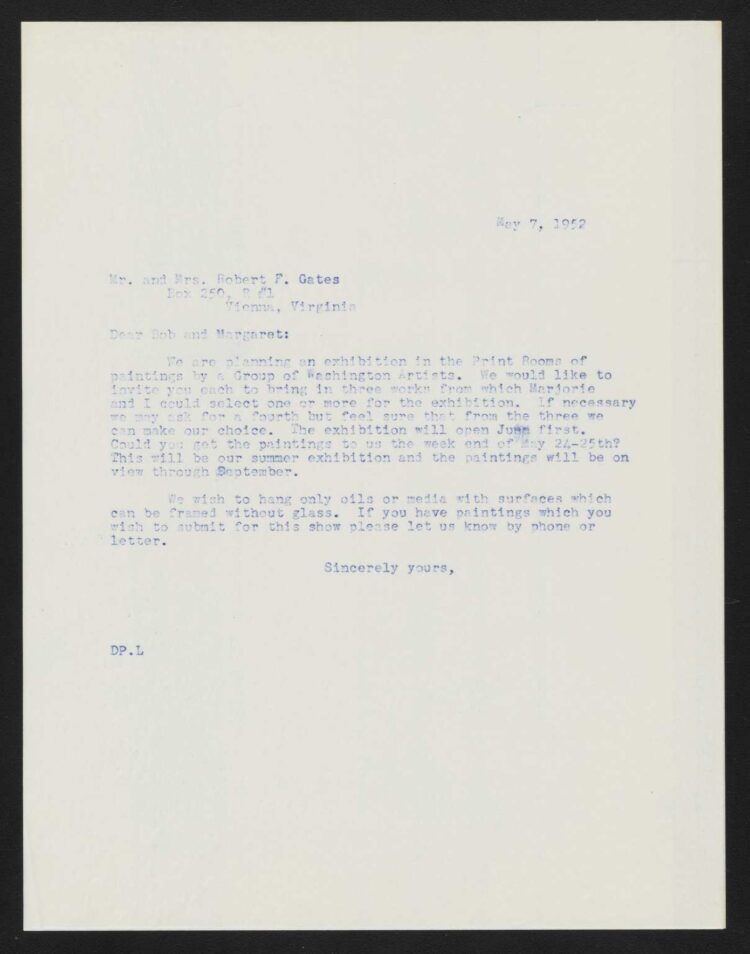 [Transcript: Dear Bob and Margaret: We are planning an exhibition in the Print Rooms of paintings by a Group of Washington Artists. We would like to invite you each to bring in three works from which Marjorie and I could select one or more for the exhibition. If necessary we may ask for a fourth but feel sure that from the three we can make our choice. The exhibition will open June first. Could you get the paintings to us the week end of May 24-25th? This will be our summer exhibition and the paintings will be on view through September. We wish to hang only oils or media with surfaces which can be framed without glass. If you have paintings which you wish to submit for this show please let us know by phone or letter. Sincerely yours, DP.L] 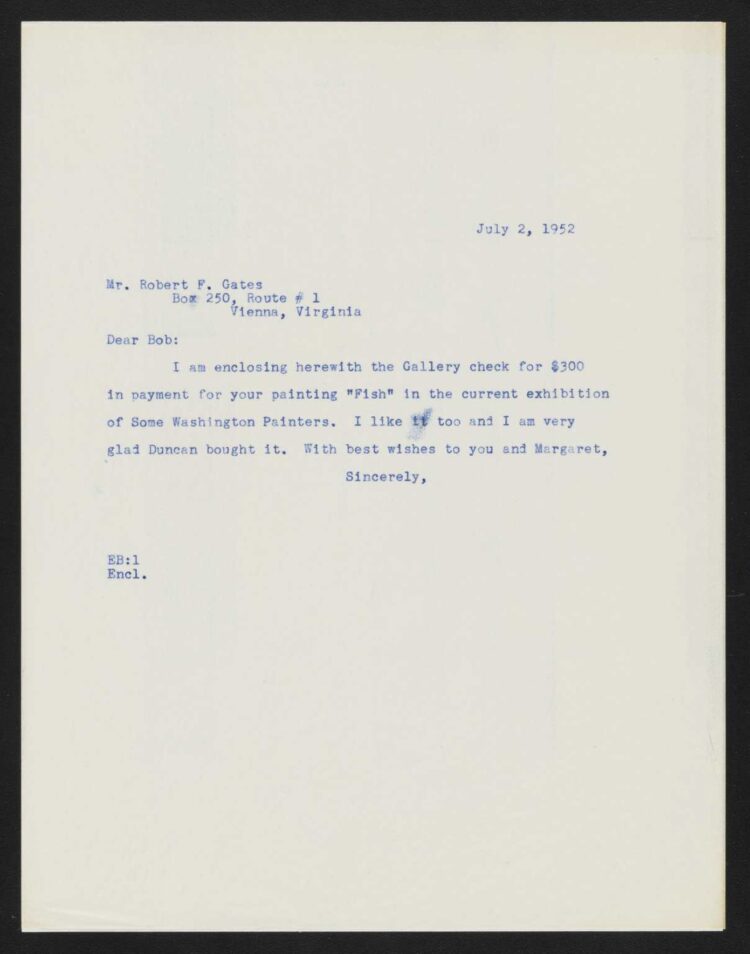 [Transcript: Dear Bob: I am enclosing herewith the Gallery check for $300 in payment for your painting “Fish” in the current exhibition of Some Washington Painters. I like it too and I am very glad Duncan bought it. With best wishes to you and Margaret, Sincerely, EB:l Encl.]

In the 1950s, Gates embraced abstraction, likely influenced by the work of his peers and the paintings by Karl Knaths and John Marin he knew well from his frequent visits to the Phillips. An important acquisition Phillips made in the mid-1950s of Paul Cézanne’s painting Garden at Les Lauves pushed Thomas toward abstraction. The purchase was highlighted in a February 1955 review in The Washington Post where art critic Leslie Judd Portner said: “Of the new acquisitions, the Cézanne is the most interesting. It is an unfinished landscape which gives us insight into the artist’s method of building up a canvas through color tones.” Twenty years later Thomas, who admired the painting and may have read the review admitted in an ArtNews interview: “Cézanne’s unfinished painting of a landscape . . . Garden at Les Lauves gave me the idea of using color to structure a painting.”

During her life, Thomas’s art could be found alongside works by her teachers. For example in 1956, paintings by Gates and Thomas were on view at the Barnett Aden Gallery’s show Contemporary Artist Group. Thomas also made a point of promoting the art of her teachers and visiting their exhibitions like this Gates show on view at the Phillips in the fall of 1975. 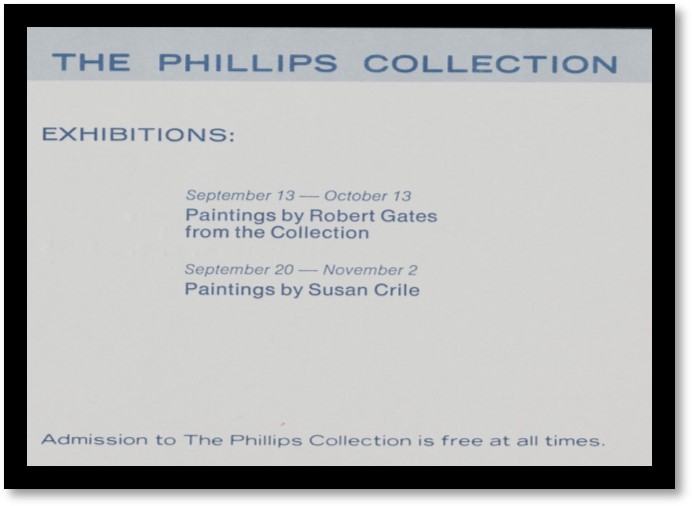