Associate Curator Renée Maurer on Lillian Evanti’s performance at The Phillips Collection in 1942.

Lillian Evans Tibbs, a Paris trained, internationally renowned soprano, with an ability to sing in several languages, traveled the world as Madame Evanti, the first African American opera singer to perform with a major European company. She held concerts at her home on Vermont Avenue, which was transformed into an informal salon, and also at various venues throughout the city, from the White House to the Belasco Theater to the Lincoln Theater to The Phillips Collection.

An important art patron and collector, Lillian Evanti first wrote to Duncan Phillips in early December 1934 after touring the collection. She described her impressions: “The museum is a magnificent contribution to Washington, for which we should be deeply grateful.” She discussed her interest in the interrelation of the arts, her fondness for the August Vincent Tack panels, sent clippings and brochures from previous performances, and asked for “an appointment” hoping to secure a concert in the Music Room. Phillips and Evanti met on December 7, 1934. Although a concert was not immediately scheduled, Evanti kept up her correspondence with Phillips, apprising him of her performances in South America, enclosing publicity brochures that detailed her work, and reminding him of his promise to host an event for her at the museum. 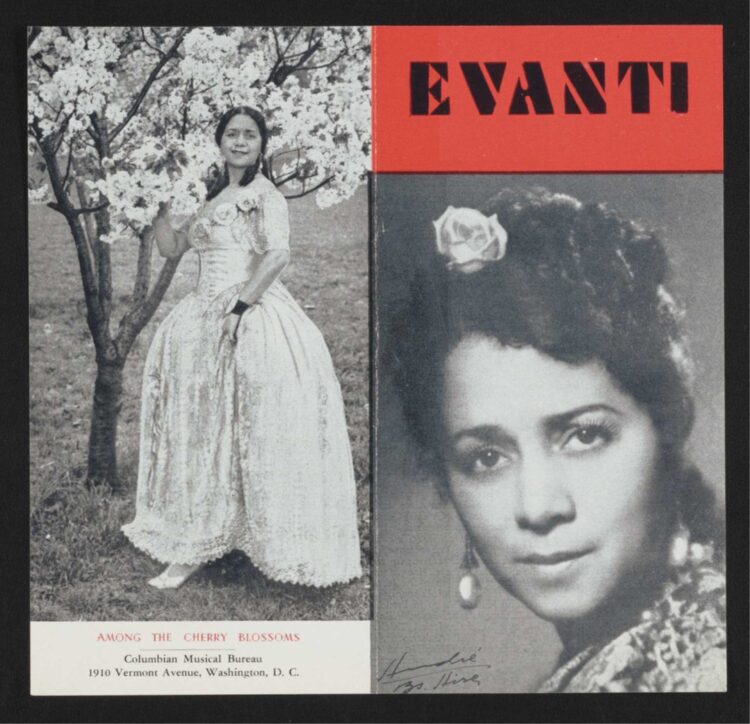 Publicity brochure for Lillian Evanti, which shows her dressed as Violetta from La Traviata standing among the cherry blossoms.

In 1942, Phillips suggested to Evanti that she perform during the Modern Mexican Painters exhibition at the museum. Pleased by the invitation, Evanti shared her memory of their first meeting, which actually occurred eight years before, and offered to sing “Inter-American music with a special group of lovely Mexican songs.” She promised to invite distinguished guests to her performance. But Evanti’s premiere was put on hold until February. 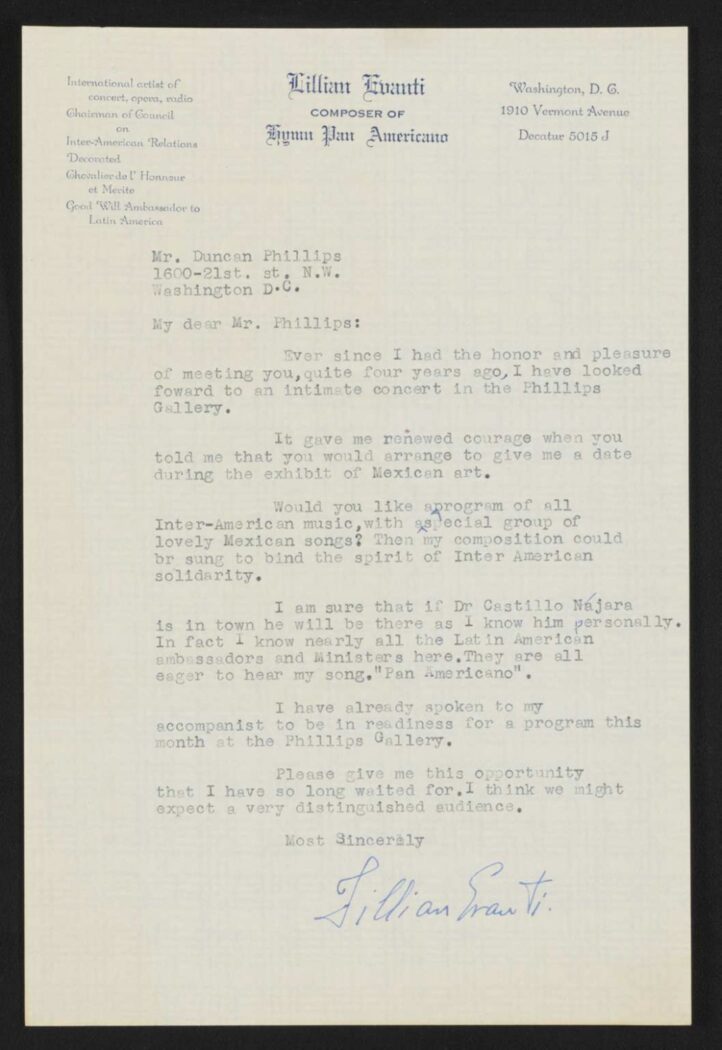 Transcript: My dear Mr. Phillips, Ever since I had the honor and pleasure of meeting you, quite four years ago, I have looked forward to an intimate concert in the Phillips Gallery. It gave me renewed courage when you told me that you would arrange to give me a date during the exhibit of Mexican art. Would you like a program of Inter-American music with a special group of lovely Mexican songs? Then my composition could be sung to bind the spirt of the Inter-American solidarity. I am sure that if Dr. Castillo Nájara is in town he will be there as I know him personally. In fact I know nearly all the Latin American ambassadors and Ministers here. They are all eager to hear my song “Pan Americano.” I have already spoken to my accompanist to be in readiness for a program this month at the Phillips Gallery. Please give me this opportunity that I have long waited for. I think we might expect a very distinguished audience. Yours sincerely, Lillian Evanti.

In mid-February, Evanti secured a day for her debut at the Phillips. The letter below indicates her interests in an immersive experience, one where several works from the collection would be on display in the Music Room to complement her song selection. Phillips kept the installation he had in place since early February 1942, which included paintings by Georges Rouault, Pierre Bonnard, and Rufino Tamayo, among others. 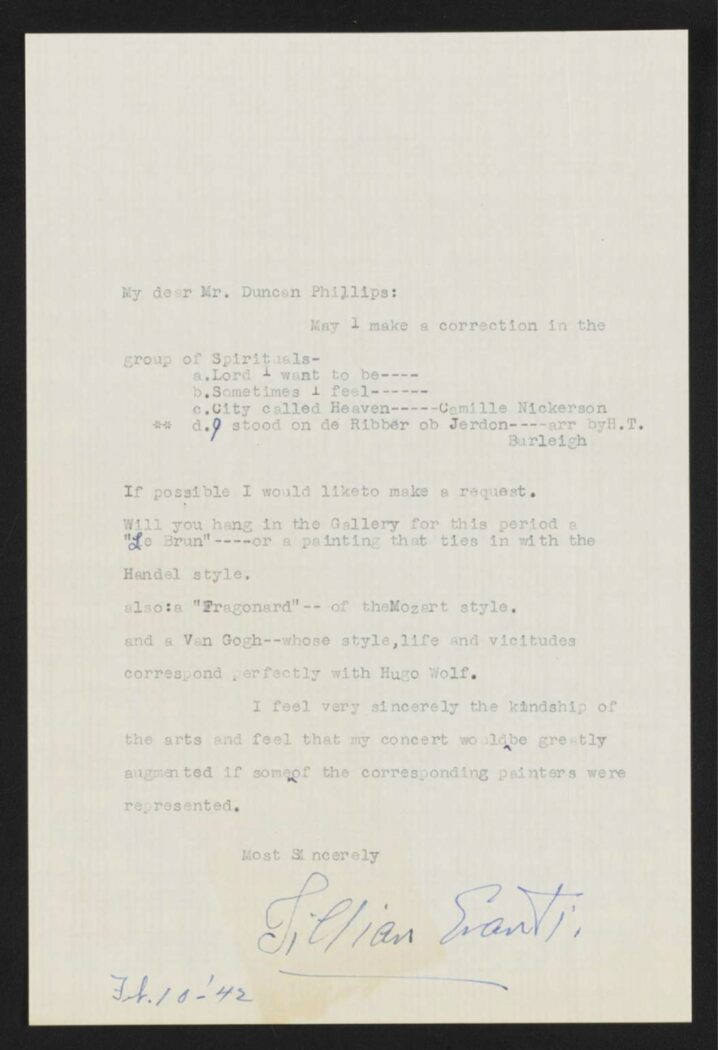 Transcript: My dear Mr. Duncan Phillips: May I make a in the group of Spirituals – Lord I want to be—- Sometimes I feel—– City called Heaven—-Camille Nickerson [mark] stood on de Ribber ob Jerdon—-arr by H.T. Burleigh If possible I would like to make a request. Will you hang in the Gallery for this period a “Le Brun”—or a painting that ties in with the Handel style. also: a “Fragonard”– of the Mozart style. and a Van Gogh–whose style, life and vicitudes correspond perfectly with Hugo Wolf. I feel very sincerely the kindship of the arts and feel that my concert would be greatly augmented if some of the corresponding painters were represented. Most Sincerely Lillian Evanti Feb. 10-’42

On February 15, 1942, Evanti performed in the Music Room “a varied program of Classics, a group by Hugo Wolf, an Inter-American group, and a group of Negro Spirituals. The concert was timed with the Phillips’s inaugural exhibition of Jacob Lawrence’s The Migration Series. Held in the museum’s print rooms, it featured all 60 panels. Evanti’s performance was well received in the local press. 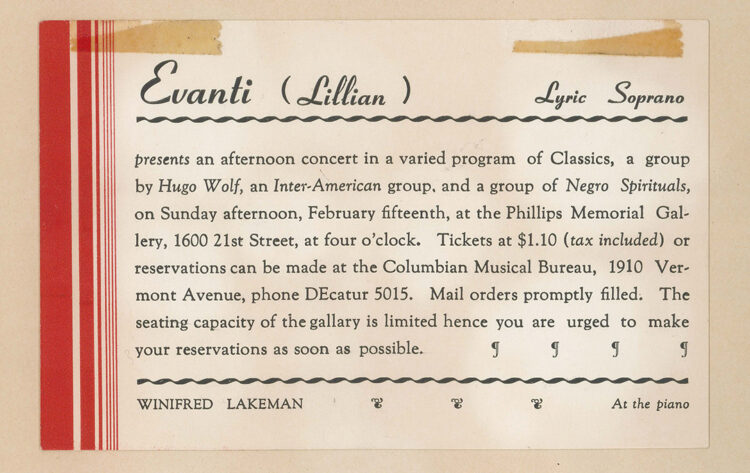 Brochure of Lillian Evanti performance at The Phillips Collection 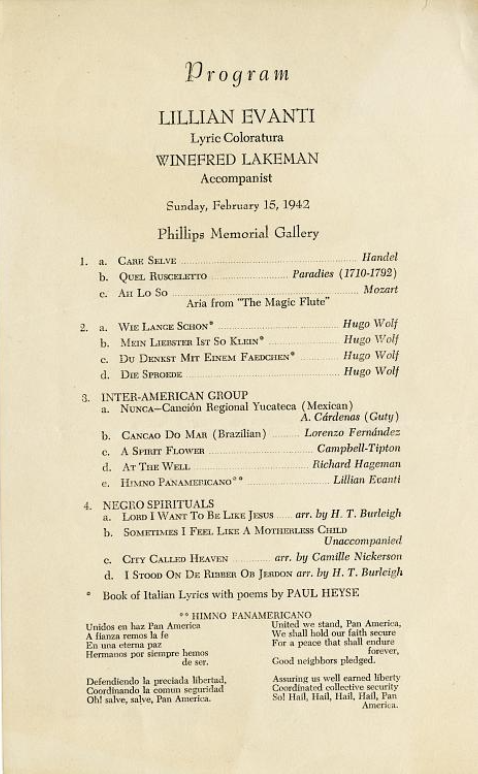 Program for Lillian Evanti performance at The Phillips Collection

This letter, which expressed the staff’s enjoyment of the concert, was sent to Evanti along with her $100 honorarium. 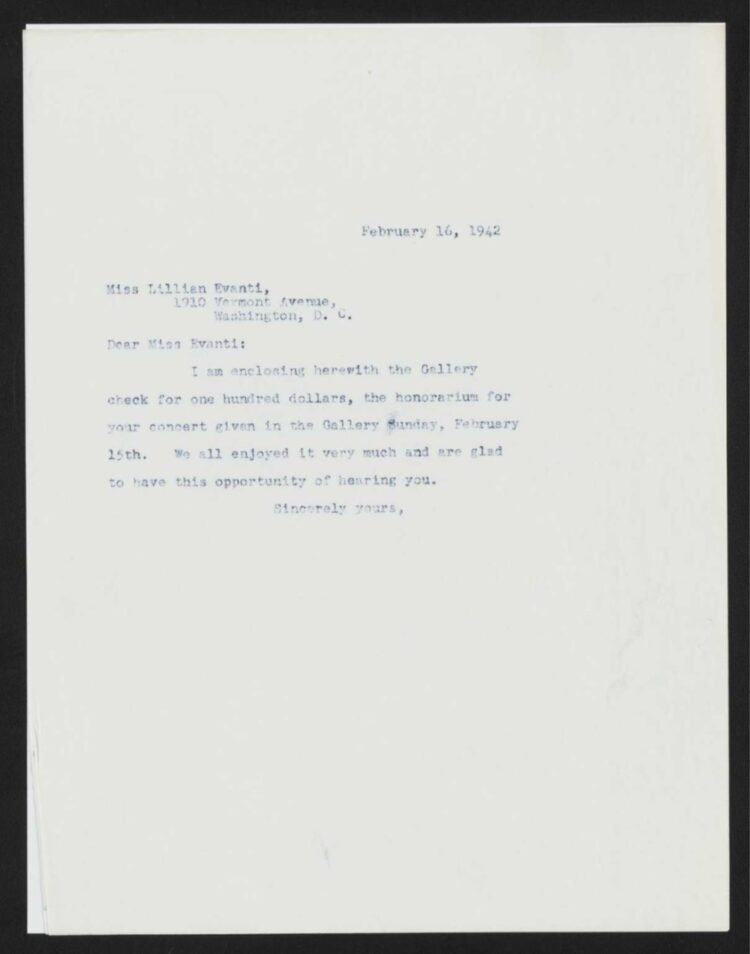 Transcript: Dear Miss Evanti: I am enclosing herewith the Gallery check for one hundred dollars, the honorarium for your concert given in the Gallery Sunday, February 15th. We all enjoyed it very much and are glad to have this opportunity of hearing you. Sincerely yours,