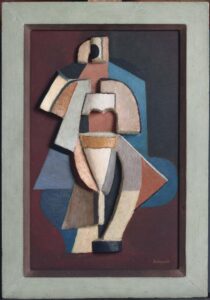 During this time of violent attacks against Ukraine, the Phillips wishes to express solidarity with Ukraine by paying tribute to influential artists of Ukrainian ancestry in the museum’s collection. In the Goh Annex stairwell are five works by four Ukrainian-born artists: contemporaries Alexander Archipenko (b. Kyiv, 1887), John Graham (b. Kyiv, 1887), and David Burliuk (b. Riabushkin, near Kharkiv, 1882); and Burliuk’s son, David Burliuk, Jr. (b. Tchernianka, near Kherson, 1913).

In the 1920s, Archipenko, Graham, and Burliuk and his family fled Russia after the Russian Revolution and settled in the United States, where they became leaders in international vanguard art circles. Their innovative work came to the attention of collectors, such as Société Anonyme founder Katherine Dreier and Phillips Collection founder Duncan Phillips. The Phillips Collection acquired in-depth holdings of work by Graham and Burliuk, giving each their first solo museum exhibition in 1929 and 1939, respectively. In 1953, Archipenko entered the collection. 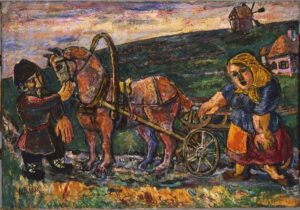 In Standing Woman, Archipenko sculpts a female body through intersecting geometric shapes, assimilating Pablo Picasso and Georges Braque’s technique of Cubist collage. John Graham similarly experimented with a Cubist language as he traveled between Paris and the US in the 1920s and 30s. Rue Brea (1928) and Embrace (1932) demonstrate Graham’s skillful command of line, angular forms, and color to evoke emotion. Graham’s close friend and associate, David Burliuk, was a versatile artist. On the Road (c. 1920), a large oil made before Burliuk came to America, reveals his use of intense colors and distorted human proportions reminiscent of folk art. Fond of lively tactile surfaces, Burliuk squeezed paint directly from the tube to create thick surfaces. While following in his father’s footsteps, David Burliuk, Jr. found his calling as a sculptor, particularly wood carvings such as Mother and Child that showcase his lyrical style. Like his European forebears Amedeo Modigliani and Picasso, Burliuk draws inspiration from African art in his stylized rendering of the figures’ facial features.

Through their active careers in the United States, Archipenko, Burliuk, and Graham became catalysts in cross-cultural exchanges that fueled the course of 20th-century art.