Sherman Fairchild Fellow Gary Calcagno on why Native voices are necessary in representing the land we occupy. Join us on April 7 for a discussion about Indigenous arts with Dr. Jolene Rickard (Tuscarora) Lisa Myers (Beausoleil First Nation).

Spring is a time of renewal and a chance to smell blossoming flowers, hear the chirping birds, and bask in warming weather. In Washington, DC, the cherry blossoms are a yearly event drawing crowds from all over and inspiring painters like Marjorie Phillips who depicted the Tidal Basin with the flowering cherry blossoms. The land around us has inspired artistic representation from time immemorial with movements like the Hudson River School being a notable American example situated in the Northeast. Artists across the U.S. have represented American soil in varying ways.

Georgia O’Keeffe, for example, is an artist who often painted the land of Taos, New Mexico, where she remained in the latter years of her life. In Ranchos Church, No. II, NM, O’Keeffe depicts the San Francisco de Assisi Mission Church, a Spanish church completed in the turn of the 18th century during Spanish colonization. O’Keeffe captures the undulating adobe facade that blends with the beige earth creating an abstracted view of the church. The church also sits on the land of the Taos Pueblo people and incorporates the commonly used adobe of the region that creates the iconic landscape of Taos, New Mexico. 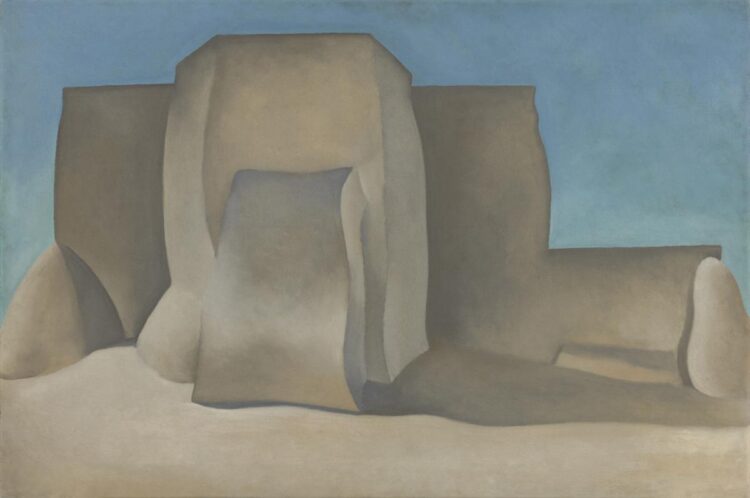 However, our relationship to the land is much more than the flowers, birds, and earth. The Phillips Collection sits on the unceded and ancestral lands of the Piscataway and Anocostan peoples of the region. Decolonizing the museum is a movement that seeks to undo the colonial violence of museum institutions. While no strategy is one size fits all, the Abbe Museum in Maine offers, for example, “at a minimum, sharing authority for the documentation and interpretation of Native culture.” When artists paint landscapes, what is often left out is the Indigenous presence, a byproduct of colonial violence.

Bringing in Native voices into museum spaces is thus a vital step in decolonizing institutions. Indigenous perspectives are necessary in rewriting narratives that have left out the very people whose land we occupy. As part of the collaboration between The Phillips Collection and the University of Maryland, we are excited for the next installment in the Antiracism: Communities + Collaborations series which will be hosted virtually on Thursday, April 7, at 6 pm EST. Dr. Jolene Rickard (Tuscarora) from Cornell University will be in conversation with Lisa Myers (Beausoleil First Nation) discussing Indigenous arts and decolonizing action. For more information and Zoom registration links, see the event page on our website.