Climate grief refers to feelings of sadness, loss, and anxiety in response to climate devastation (1). In Week 3 of the Nature|Spirit|Art course, we wanted to offer tools that could enable our course participants to explore their experience of climate grief with curiosity and process it in ways that might inspire purposeful action. Many spiritual traditions of the world teach that experiencing grief is inevitable, but suffering need not be. The Bhagavad Gita extols the power of karma yoga—the practice of intentional and skillful action performed selflessly and with an equanimous attitude—in delivering humanity from suffering. Bringing together this ancient wisdom with the contemporary practices of mindfulness, I led a meditation inspired by Panel 3 of Jacob Lawrence’s Migration Series. 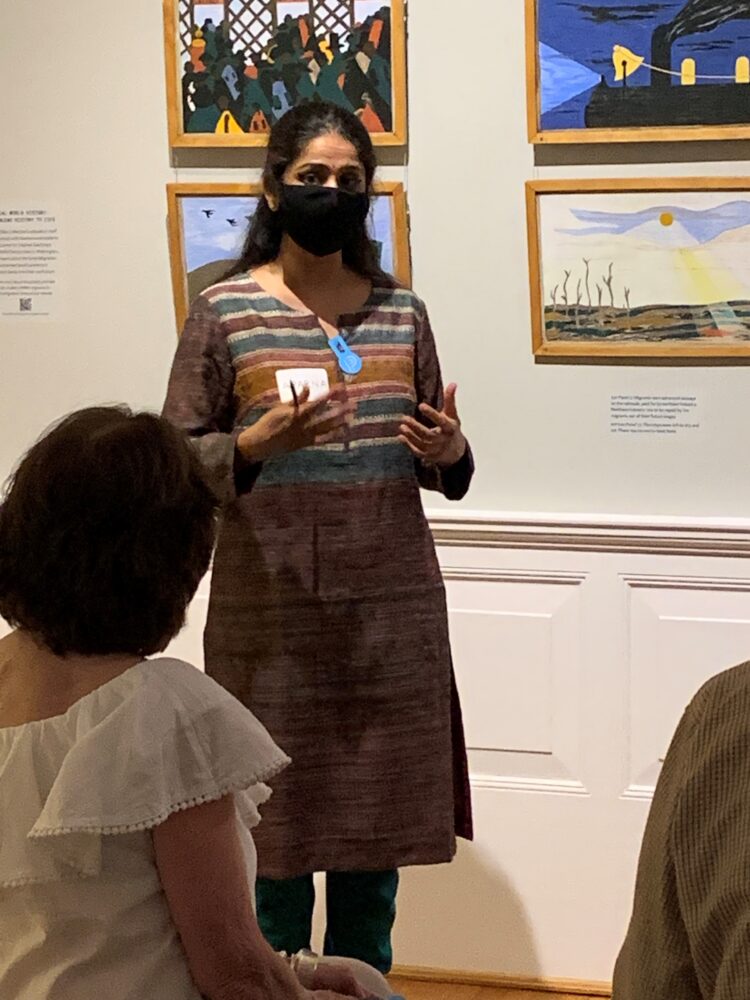 Our practice started with a guided body scan to help us become grounded in the present moment. Centering our attention this way, we took a close look at the painting, observing, and appreciating the poetic use of line, shape, space, color, and light. In Panel 3, a packed group of migrants moves across a barren landscape, under a flock of freely flying migratory birds. The migrants head forward, carrying the weight of their belongings and their past, in the same direction as the birds above. The caption reads, “From every Southern town, migrants left by the hundreds to travel north.” 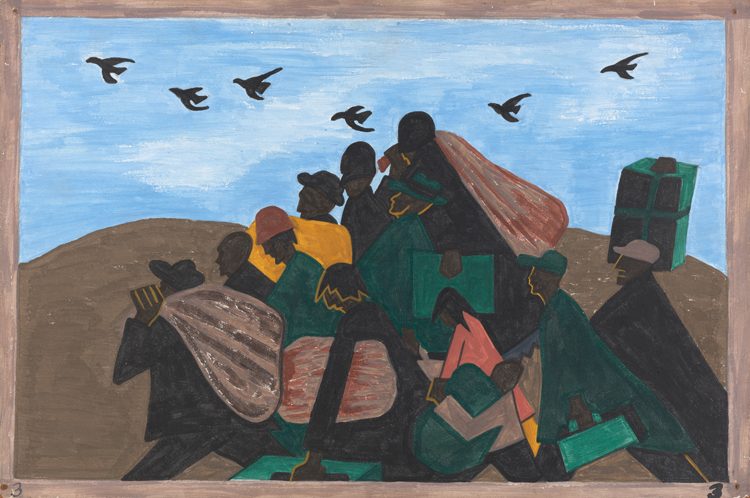 As explained by course co-facilitator Joshua Shannon, this painting, like the other panels in the Migration Series, depicts the intertwined social, political, and environmental causes and consequences of the Great Migration northward. They are a grim reminder of the disproportionate impacts of climate change on the socio-economically disadvantaged communities that would be least prepared to respond to the crises.

To assist the participants in holding space for their subjective response to Panel 3, I led the participants through the following practice. We first practiced Ujjayi breathing—a deep breathing technique that helps slow down and lengthen the breath. They could silently repeat the phrases, “We are here, now” and “We are together” on each inhale and exhale respectively.

After taking several mindful breaths, the participants were guided through a non-judgmental awareness of the bodily sensations they could notice in that moment. To facilitate further relaxation into their awareness, I invited them to intuitively attune to the space within their bodies and notice the expansion of this space with each slow inhale. We visualized the mind as the sky and each thought as a cloud. Instead of attending to the clouds, we chose to focus on the sky’s clear light and expansive qualities. These practices provide opportunities for the practitioner to cultivate a shift from emotional reactivity to intentional response. Insights gained through an unbiased view in a calm state of mind can help to discover innovative solutions to what may seem like a dead end in a state of reactivity.

After resting their awareness here, the participants were guided to slowly come back to what they noticed in the mind-body now—the new present moment—and once again become grounded in their embodied presence. We concluded with a quote by the Sufi poet  Rumi: “You are not just a drop in the ocean, you are the entire ocean in a single drop.”

The sharing of our personal feelings about climate grief in groups of three, facilitated by course co-facilitator Robert Hardies, offered another approach to address this issue. In summary, these skills helped us recognize human resilience in the challenging journey from injustice, grief, and uncertainty to freedom and hopes of a better future, whether it was about climate change or a response to Jacob Lawrence’s Migration Series. We closed the evening on an empowering and optimistic note, setting the stage for Week 4, when we will explore “New Perspectives.”

In partnership with the US Department of State, The Phillips Collection collaborated with museums across Italy in fostering diversity and inclusion for audience and program development. Hilary Katz, Head of Teaching & Learning, and Emma Dreyfuss, (former) Manager of Community Programs, discuss the workshops conducted on their travels to Italy, May 2-6, 2022.

How can we create a visionary design of a museum—as a place for people to meet and converse? How are we breaking expectations for how people experience museums? We explored these questions throughout collaborative programs during our week in Turin and Milan. We exchanged ideas for how the future of museums and the arts can be imbued with principles of diversity, inclusion, and accessibility.

As a result of the Phillips’s virtual diversity and inclusion workshops in 2021, Galleria Civica d’Arte Moderna e Contemporanea di Torino (GAM Turin) organized a multi-sensory meditation workshop with artist Marcos Lutyens. Through guided meditation, we drew with our hands on a table covered in salt and molded clay—all with our eyes closed! 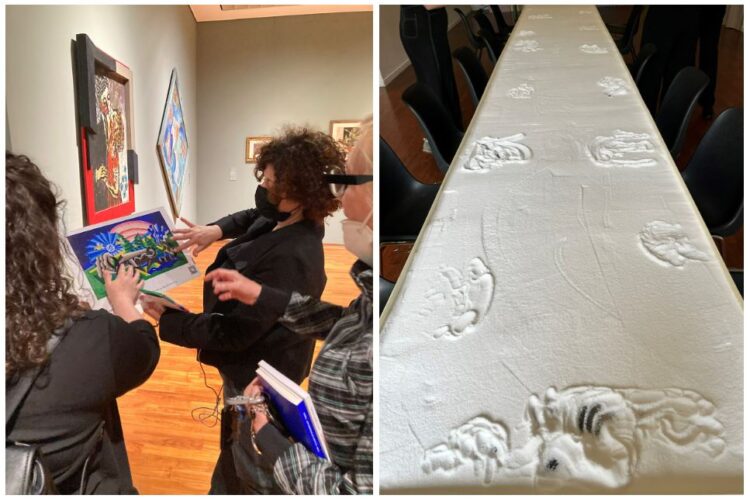 Left: Exploring a textured reproduction of Fortunato Depero Fondo’s L’aratura (1960), which is intended as an accessibility tool for low vision visitors, at GAM Turin; Right: During a trance-like experience led by artist Marcos Lutyens, we meditatively drew in salt with our hands.

Museum Science university students who had attended Lutyens’s meditation workshop returned to explore our identities as local and global citizens of the world. We learned stories of how everyone in the group experiences their identities differently, yet through universal themes of community and global connections. We observed Jacob Lawrence’s Migration Series, Allan deSouza’s The World Series, and Aleksandra Mir’s World Map of Underworlds as a catalyst for conversation about the power of identity and storytelling.

Left: University students write “blackout poetry” in response to Aleksandra Mir‘s World Map of Underworlds (2006); Right: Some of the drawings created by the university students using the same paint markers and paper that Mir uses in her works.

How do we decide what works of art to use for our education programming and resources? How do we ensure that women and artists of color are not overlooked, even though many museum collections consist primarily of white male artists? Using as a jumping off point GAM Turin’s reinstallation of its permanent collection, A Museum without Boundaries, we analyzed what works we gravitate towards and why. We played with the Phillips Art Cards, featuring 54 Phillips Collection artworks, to confront our biases when selecting artwork.

The week was an enlightening and invaluable exchange of ideas. We also met with Director Davide Quadrio of Museo di Arte Orientale (MAO) about his visionary plans for renovating and reinstalling their collection; with the Directorate of Culture in the Turin Municipality about their annual art week, Artissima, which shines light on Turin’s art and culture; and with Museo del Novecento (Milan) colleagues about the concept of diversity and inclusion in Italy through the lens of citizenship. 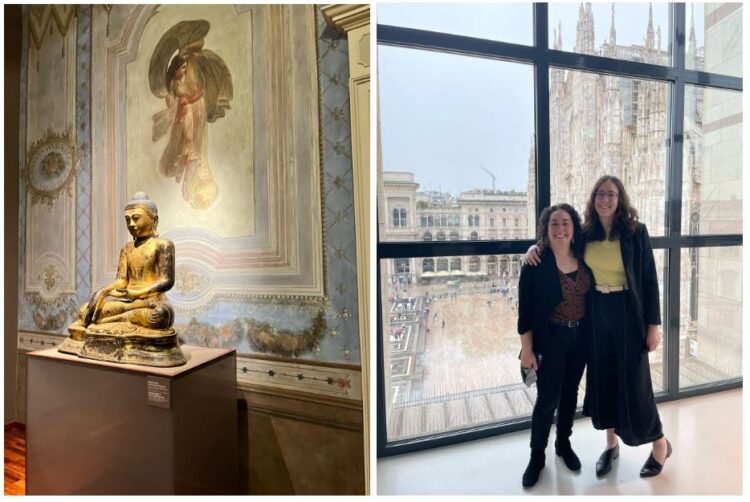 We can’t wait to see what this international collaboration with Italian arts and cultural organizations brings next!

Want to learn more about LGBTQ art history? @samesexinthecity shares some artists in the Phillips’s collection that provide a window into LGBTQ art and history. 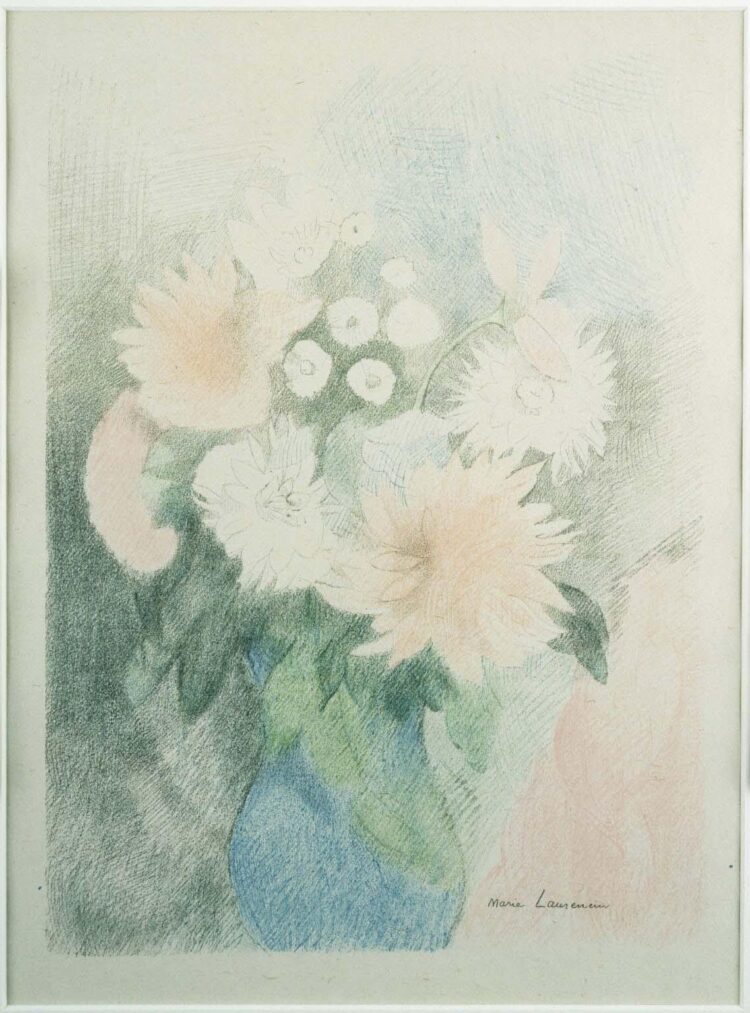 Marie Laurencin is known for her distinctive paintings, featuring dreamy, fantastical scenes and pale, doll-like women. She socialized with other avant-garde artists and thinkers, including Pablo Picasso, poet Guillaume Apollinaire, writer Natalie Clifford Barney, and more. Laurencin’s practice was successful at the time, and she frequently accepted commissions for portraits, stage designs, and book illustrations. Her engagement with prominent gay and lesbian thinkers and philosophers at the time, as well as her distinctive sapphic imagery, is a good snapshot of early-20th-century Paris and the emergence of a public LGBTQ identity. Today, art historians are exploring more about her relationships with both men and women, and re-centering her as a prominent female avant-garde painter.

In 1951, the Phillips hosted Keith Vaugan’s first solo museum exhibition in the United States. Vaugan was a self-taught British painter who was a leader in the Neo-Romantic art scene. His later works became more abstract, moving away from moonlit houses and landscapes toward the male nude. He is one of many artists whose private writings express anxieties as a closeted gay man, and whose works display self-censorship at a time when homosexuality was still illegal and considered obsene. 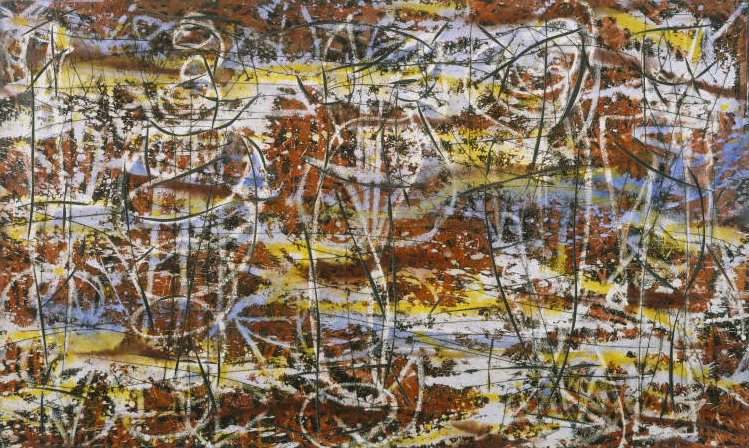 Alfonso Ossorio was an artist and collector whose friendship with Jackson Pollock and Jean Dubuffet was explored in a 2013 exhibition at the Phillips. Ossorio’s artworks span from Abstract Expressionism to his later experiments with assemblage, exploring his Catholic upbringing and its conflict with his own homosexuality.

Robert Mapplethorpe courted controversy throughout his career. Known for his black-and-white photographs, his artworks explored S&M, sexuality, and fetishization. Exhibitions of his work came under fire during the 1980s and ‘90s, sparking conversations about censorship, obscenity, and public art funding. Today, his artworks still spark conversation and controversy. Contemporary artists such as Glenn Ligon have responded to Mapplethorpe’s nude photographs of Black men, challenging the notions of objectification and fetishization. Mapplethorpe’s huge body of work shows an artist exploring queer identity and sexuality, imbuing commercial work and portraits with distinctly queer principles, and, toward the end of his life, an artist contending with the HIV epidemic and his own health. 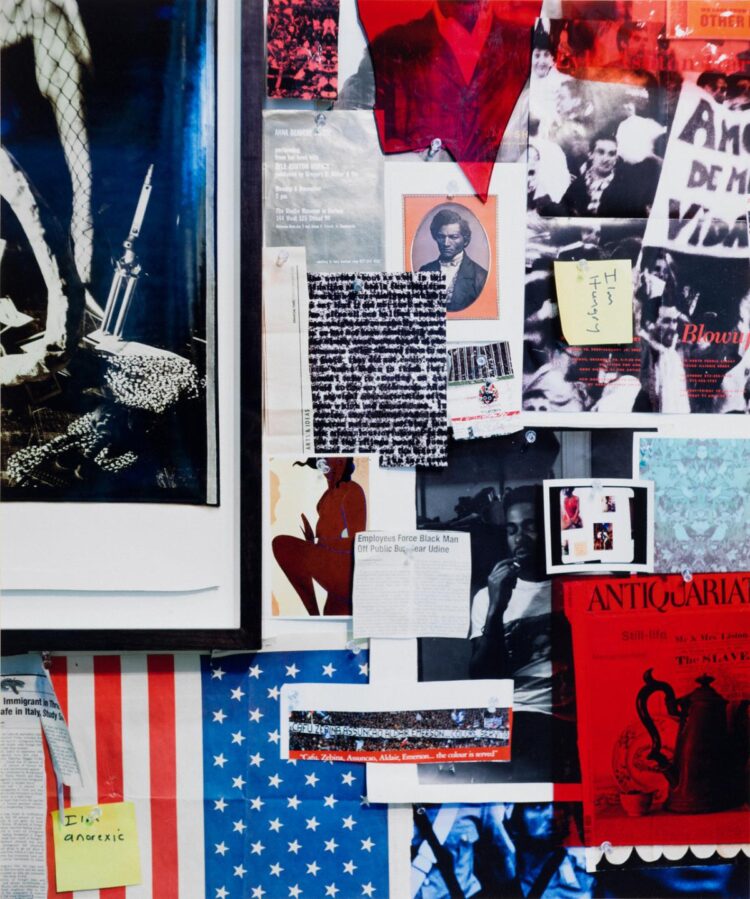 Harris is an important contemporary artist exploring queerness, race, and cultural assumptions about identity through a variety of mediums, including collage, photography, video, installation, and performance. His artworks question historical images of Black identity, playing with both familiar figures (such as Cleopatra and Billie Holliday), as well as uplifting people in his life and orbit. In his photographs, performances, and videos, as well as his extensive archive of photos and videos taken over the span of his life, he revels in a world that is bold, unabashedly queer, and triumphantly Black.