On a school tour with a theme of color, line, and shape, we enter into the gallery showcasing the many works related to the Jefferson Place Gallery. The plan was to look closely at Ben Summerford’s brilliant, tall, still life entitled The Blue Bottle, 1949-51. My lesson plan has us using a visual thinking strategy to look closely at The Blue Bottle, concentrating on the artistic choices made by Summerford.

That is not what my student wanted to discuss at all. Instead, her eyes are drawn to a small assemblage by William Christenberry that hangs on the wall perpendicular to The Blue Bottle. 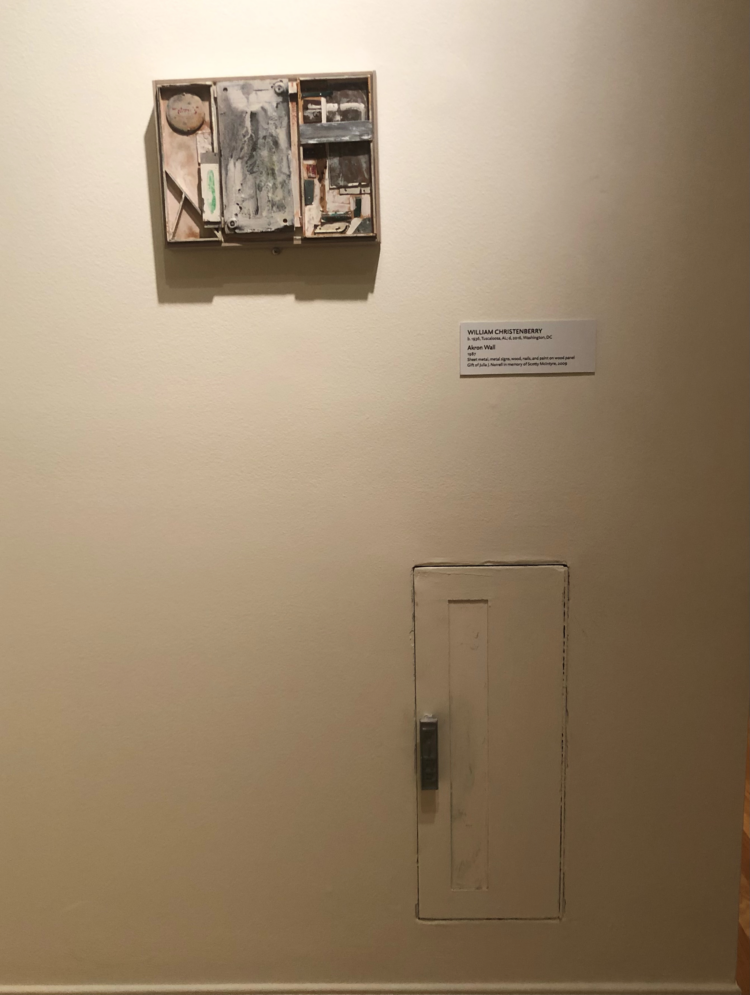 “I want to talk about that work of art.” She points to the Christenberry. ‘What IS it?”

“It looks like a bunch of junk,” she says definitively. “But, I like it. It is interesting.”

We examine the wall text and learn it is called Akron Wall, was made in 1987, and is constructed of sheet metal, metal signs, wood, nails, and paint on wood panel. I explain that Akron is a city in Ohio. We muse about the title, the choice of objects, and its possible meanings.

“What about the rest of the work?” she asks me.

I looked at her, a bit confused. Akron Wall is very intriguing but it is small and contained. She points to a spot on the wall under Akron Wall. There is a tall, narrow rectangle, delineated by a rough edge, chipped and warped in places. A recessed rectangle marks one side along with a metal handle.

“That part of the art. It looks like it could be a door! I want to know about that. I wonder, what is behind the door?”

This door is not part of the artwork. There is a long discussion about what might be behind the door. A little man? A bottle of water? A bag of chips? What would be behind the door? Although the door has the same palette as Christenberry’s assemblage, incorporates metal, has similar repetitive shapes and has gray smudges of a well-worn, maybe found object, I can’t help but spill the beans.

“Well, it is not actually part of the artwork,” I explain. By this time all the students are invested in the door, and they are crestfallen, thinking that they are doing just what I have encouraged them to do: look closely and ask questions, ponder possibilities, and trust their insights since there are no wrong answers.

I wanted to talk about the Summerford, not a door in the wall of the gallery. I should have asked the question back to them: “What do you think is behind the door?” But instead I try to guide the conversation back to the original topic I had planned for.

“I think there is a fire extinguisher inside. Now, let’s talk about the colors that Summerford used….”

I could have used the moment to tell him about the fire the Phillips suffered in 2010, but instead I add, “Or a telephone.” Lots of discussion goes on among the students, and they request that I open it. I explain that I’m not allowed to touch the walls of the gallery and open the door.

Looking back on this, I think how intriguing it would be if this door had been conceived by Christenberry. The door introduces the unknown, and the idea of possibility. If there is a phone, who would call it? Could we hear it if it rang? If there is a fire extinguisher in there, would it have some lettering on it? Would the fire extinguisher be red and relate nicely to the worn lettering on the top left of the assemblage (a Coke bottle top)? Is the little space behind the door shallow, like the indented boxes within the Christenberry piece?

We have a brief conversation about the Summerford, the artwork I originally wanted to discuss. In fact, the students’ curiosity seems to have been piqued by the discussion of the possibilities introduced by the evocative door. It reminds me that adapting to students’ interests can ultimately enhance a lesson.

As we walk down to the bus, the student who started the discussion persists; she insists the door should be part of Christenberry’s assemblage: “Then it could be called Akron and Phillips Wall.”

In one of our permanent collection galleries, Curator Renee Maurer has selected works by artists who were associated with Jefferson Place Gallery (1957–1974), a small cooperative gallery dedicated to promoting and exhibiting the work of DC-based artists. When it opened at 1216 Connecticut Avenue, just south of Dupont Circle, it was one of the few commercial art spaces that focused on the local arts community. Its pioneering exhibitions explored new means of painting, printmaking, sculpture, photography, and conceptual art. It was founded by American University art faculty who had trained at the Phillips Gallery Art School (1931–1950), including Robert Gates and Ben Summerford, together with Helene McKinsey Herzbrun and Alice Denney, the inaugural director.

In its 18-year history, Jefferson Place Gallery presented nearly 190 shows that supported more than 100 DC-area artists, including Washington Color School painters like Kenneth Noland, Gene Davis, Thomas Downing, and Howard Mehring, as well as Willem de Looper, and William Christenberry. Duncan and Marjorie Phillips were frequent visitors to the gallery and acquired the paintings by Noland and Herzbrun on view. 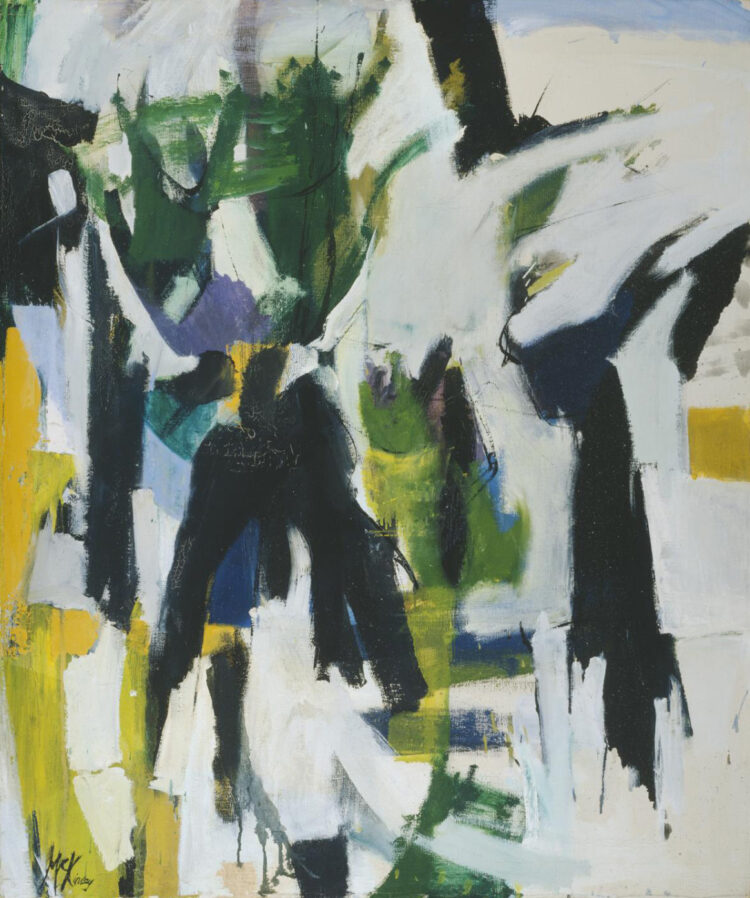 In 1950, Helene McKinsey Herzbrun pursued an MFA in painting at American University, where she studied with both Jack Tworkov and Robert Gates. She then managed the Watkins Art Gallery at AU and joined the art department faculty. With the opening of Jefferson Place, Herzbrun and her colleagues developed a creative community that encouraged the display of contemporary art in the nation’s capital. In a letter to Tworkov from October 1, 1957, Herzbrun described how finding a space for Jefferson Place on Connecticut Avenue was like “a dream come true . . . the group is strong enough to make a real statement.” Herzbrun had seven one-person shows at Jefferson Place between 1958 and 1974. Duncan and Marjorie Phillips purchased this work, formerly tilted Young Pine, from the gallery in 1959 for $125. 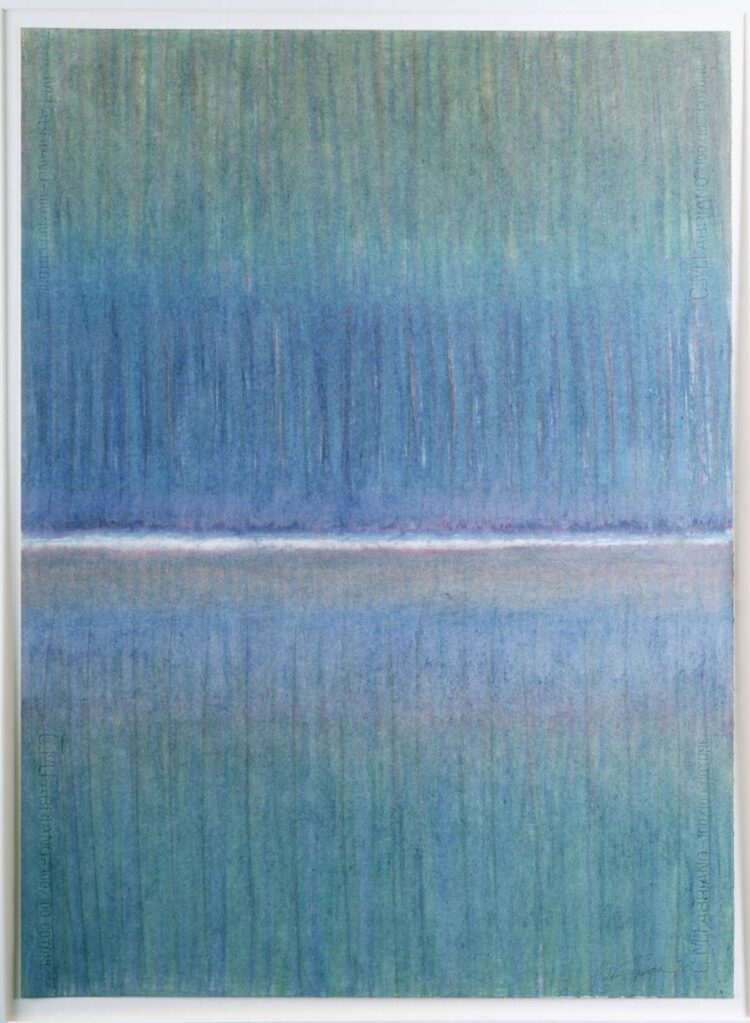 Hilda Thorpe’s art was influenced by the gestural paintings of her professors at American University, including Gates and Tworkov. In 1959, Thorpe was awarded a capstone exhibition at AU’s Watkins Gallery: a two-person show shared with Alma Thomas; the next academic year, Thorpe become the director of Watkins Gallery. Thorpe was encouraged by her mentors to exhibit at Jefferson Place, and her emergence there coincided with the beginnings of the Washington Color School and the vivid circle and striped paintings by Kenneth Noland and Gene Davis. Thorpe’s exposure to all-over painted color fields led to her exploration of expressive pastels, some of which were on view in Thorpe’s one-person show at The Phillips Collection in 1975.

To everyone who enjoyed our galleries, attended a program, joined us for a concert: thank you! (And thank you for sharing your great photos with us!)

Best of DCist and WAMU