2021-22 Sherman Fairchild Fellow Shiloah Coley speaks with Jessica Valoris about her video work in the Phillips 100th anniversary Juried Invitational Inside Outside, Upside Down.

The City at Peace youth development program in Washington, DC, introduced Jessica Valoris to art as a catalyst for collective healing in her high school years. “It was the first time I experienced art as a way that I could connect. Where I could experience my own emotions and also experience compassion and empathy with other people,” said Valoris.

The program seeks to provide a safe, collaborative, and nurturing space for young folks to examine systems of oppression. “It totally changed the trajectory of my life. Being in spaces with other young folks who were exploring these things and developing a language to make sense of all of the violences that we were experiencing.” For Valoris, this made her approach to her artistry focused on the collective and community from the get go.

As the protests and uprisings ensued with the police murder of George Floyd, Valoris became deeply immersed in the study of Black fugitivity and marronage, the process of extricating oneself from slavery. She dedicated all of her media consumption to learning about these histories, from watching documentaries to making playlists and listening to oral histories.

“There was this extra push that felt like as the world was talking about abolition, I really wanted to root it in the experiences of our ancestors and the fugitive ancestors that made abolition possible,” said Valoris. “What are the practices they created and innovated that we can learn from  now in this moment?”

Her piece in the show, still: a rival geography, pays homage to her Black and Jewish ancestry through ritual practice. The video, which was shot on an iPhone and edited in iMovie, was the result of her participation in a collaborative commission called black/water facilitated by Ebony Noelle Golden. The project tasked artists with exploring the relationship between Blackness and water. For her, this became a way to link what once felt like disparate parts of her identity—her Blackness and Jewishness.

While exploring her histories, she began to consider Jewish ritual around water, which is evident in the beginning of still: a rival geography. “When you wake up you’re supposed to wash your hands and say a blessing over it. It’s basically just understanding that everything you touch, everything that touches you is sacred,” Valoris said. 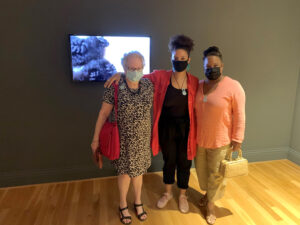 Jessica Valoris with her work in the Inside Outside, Upside Down galleries.

The video progresses to the practice of the creation of a sacred circle which is present in many different traditions, including ancient Judaic processes. She writes names inside an incantation bowl, a practice traditionally completed by burying the bowl under one’s home once the names of their ancestors are listed to protect one’s family.

All of these rituals are tied to her ancestral lineage, but it’s the soundscape that seems to unite the piece, tying the rituals together. The emphasis on stillness emerged from a trip she took to South Carolina to visit her elders. Upon her arrival she threw out her back, finding herself unable to move, forced to be still.

As she spoke with water doulas who were a part of the larger black/water project, she was advised to listen to her body and consider what it was asking her to do. Stillness was the answer. Searching for stillness in the midst of the particular chaos of the past couple of years brought on by the pandemic and heightened racial tensions is perhaps a decision to preserve and to care for oneself and others.

2021-22 Sherman Fairchild Fellow Shiloah Coley speaks with Grammy-nominated multidisciplinary artist Kokayi, whose photography is in the Phillips 100th anniversary Juried Invitational Inside Outside, Upside Down. 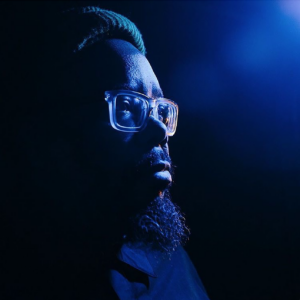 Kokayi photographed by Lexey Swall, Courtesy of the artist

“No, you’re going to take the pictures.” That’s what Kokayi’s wife said to him back in 2019 when he considered searching for a photographer to create the visuals alongside the record he was working on, “HUBRI$,” as a Halcyon Fellow. He hesitated to consider himself a “photographer” at the time. In his fellowship proposal for the project, he wrote that he would be hiring a photographer to shoot the visuals. 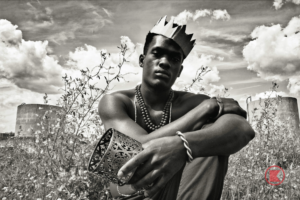 Photo from “HUBRI$” visuals, Courtesy of the artist

Anytime he’s gone on tour, he’s taken photos with intent, looking to document and capture a moment. Yet, the imposter syndrome he felt about being the photographer for his own project crept up.

“When you’re around a bunch of artists who you know are at the top of their field, that’s the other intimidating part,” said Kokayi, who has always been surrounded by circles of creatives including folks with great eyes working in photography and videography.

After expressing feelings of discomfort around shooting the visuals for his work, his photographer friends were the ones to push him, suggesting he needed to just pick up the camera and holler at them when he was ready to get into it. And he did, he picked up the camera and learned along the way. It wasn’t the start of something new, but a recognition of something always there, just waiting to be developed.

From childhood, Kokayi’s interests spanned a wide range of artistic practices from graffiti to music-making. He attributes some of this initial exploration and multi-faceted approach to the hip hop culture he grew up in.

“Hip hop culture started out multi-faceted. There were a multitude of kids that breakdanced, did graffiti, DJed, beatboxed. You know everything—the fashion and style, they did all the stuff. It wasn’t like you did one thing. You weren’t a monolith,” said Kokayi. “Black people aren’t monoliths. Hip hop isn’t monolithic. People aren’t monolithic, but you know they try to paint us, especially as a Black person, try to paint me into a corner based on my pedigree.” 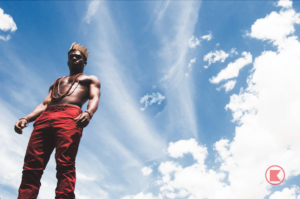 Photo from “HUBRI$” visuals, Courtesy of the artist

The artist reminds the youth he works with as a mentor not to allow others to dictate how they express themselves. He finds himself reminding adults about this too.

A man once expressed that he didn’t have any musical talent to Kokayi as they waited in an airport, and he responded with “Yes, you do. When you were a kid (and this is what I tell the classes), when you were a kid, you would make up songs. You would make up songs and plays and poetry and all kinds of things just expressing yourself artistically. And the time that you stopped is when somebody told you you weren’t good. That’s when you quit.”

Kokayi doesn’t quit. He keeps learning whether it be through a book, sweat equity, or his practice. He continues to develop what’s always been there even if that practice or craft hasn’t been as deeply explored as some of his others. So when his friend called to ask if he could come take pictures of her beauty shop before she closed the doors for the last time, he was there.

His friend built the shop from the ground up, doing the interior design work piece by piece, and paying for it all through her labors as a hairstylist doing heads in her home. He watched her open the shop. Now, he photographs her closing the shop. 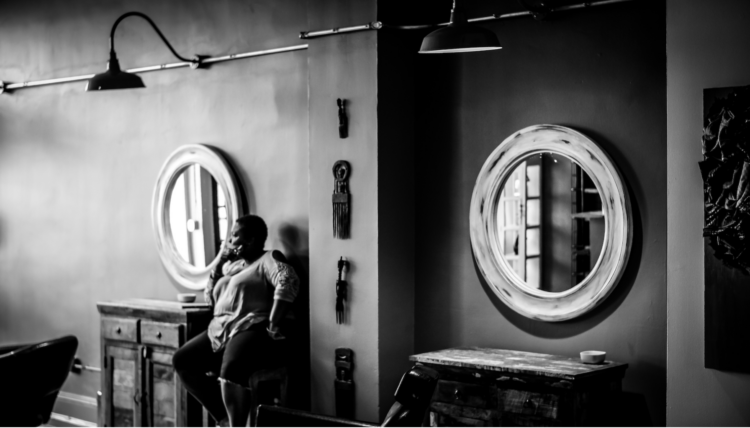 Kokayi, When Letting Go is Love, 2020, Photograph, Giclee Print, Courtesy of the artist

“It was tearing me up to even clip the thing,” Kokayi said in reference to taking the photos. The candid he took of her looking out the window in her final moments with the shop, When Letting Go is Love, is one he debated submitting to the call for Inside Outside, Upside Down.

While her glance out the window might be interpreted as somber, her composure is held as she sits upright and out of focus. “For me what made sense is it’s out of focus like she’s out of focus right now,” said Kokayi.

So many, especially Black women and folks of other marginalized identities, tackled an onslaught of extrapolated inequities with the pandemic. He captured a moment that so many felt and lived. Perhaps not a resilience, but an endurance.

The Nicholson Project recently announced Kokayi as one of their upcoming fellows for 2022, and his book, You are Ketchup: And Other Things Known by a Career Musician, comes out in March of 2022. 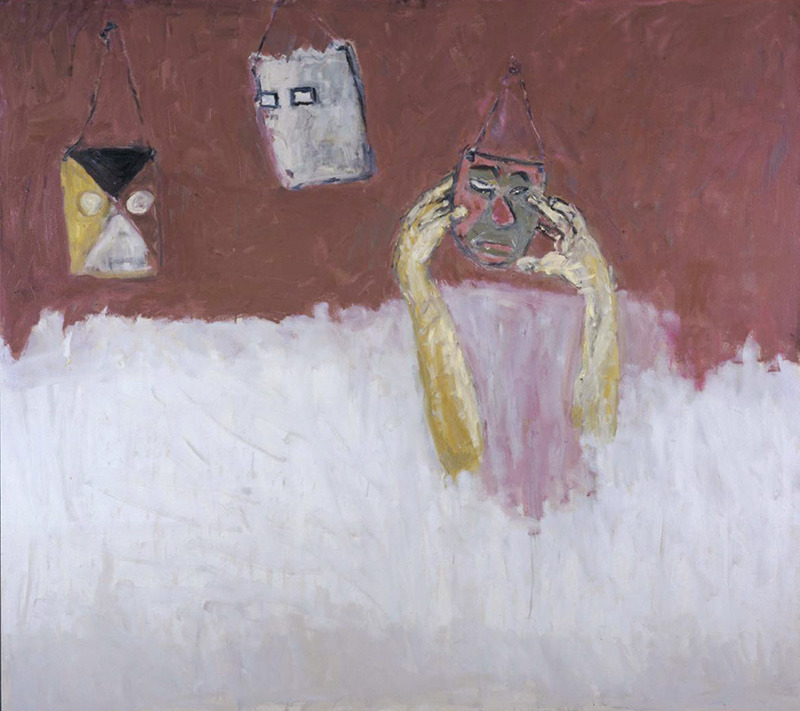 The strong contrasting colors is what first drew my attention, the dirty white palette fighting against the harsh red tones, as though the colors were competing for my attention. The canvas is filled by the masks hanging off hooks, each with their own distinct differences. From the bottom of the canvas a pair of disembodied arms reach upward toward one of the masks and out of the murky palette. While direct in its subject, it felt as though the work had given me a lot to digest. Keeping in mind the central theme of identity, I lingered on how the artwork conversed with the works around it.

Susan Rothenberg was born in Buffalo, New York, and is best known for her paintings of figurative scenes as well as her influential Horse series. Three Masks by Rothenberg presented me with a question; who are we? Masks are traditionally objects of transformation that allow us to alter ourselves, taking on separate roles in our lives as needed. While we believe ourselves to have certain defining qualities we periodically mute or exaggerate parts of our demeanor and adopt a more acceptable form of ourselves depending on what is asked of us. Therefore, masking who we truly believe ourselves to be. The need to change who we are depending on the circumstances is something that is present in my life as a person of color. Young people of color in particular feel the need to adapt in order to be accepted, more specifically in professional settings. This phenomenon is known as code-switching. The lack of distinctive qualities such as the disembodied arms, inspired me to consider the struggles of understanding our own identity and who we are in and out of societal expectations. This social contract we have unknowingly accepted further encourages us to take on metaphorical masks of our own. How much am I willing to change myself depending on the circumstances? 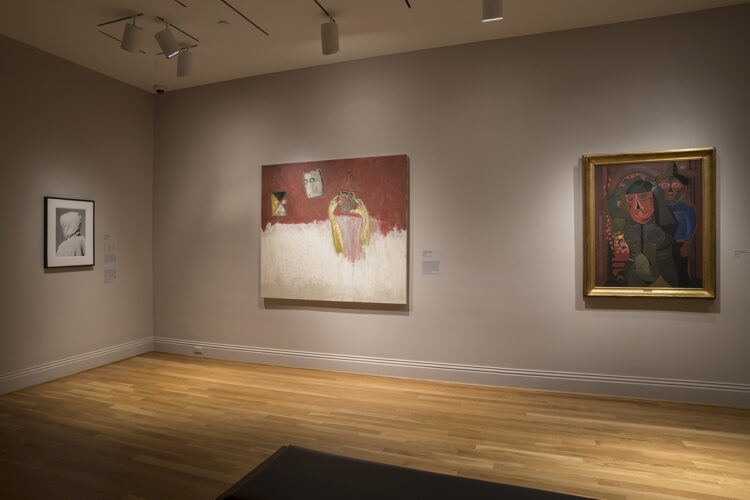 The historic importance and artistic interpretation of masks has been relevant for thousands of years. Masks continue to hold strong cultural weight and have been more present in our lives than ever due to the COVID-19 pandemic. The masks present in the art piece encourage us to interpret what each mask might represent. To the right we see Rufino Tamayo’s Carnival and to the left is John Edmond’s Untitled (Hood 2). While Carnival focuses on the cultural importance of masks, specifically as it relates to Mexican heritage, Untitled (Hood 2) makes a clear comment on racial profiling and Black identity. All three pieces purposefully withhold from the viewer so that we may identify with the art and help us to step outside of ourselves.

Masks not only conceal our identity but help us transcend who we are. We use masks to veil our individuality, helping us to hide away that which leaves us vulnerable. Throughout art, and history, masks have been used to represent something more than ourselves.