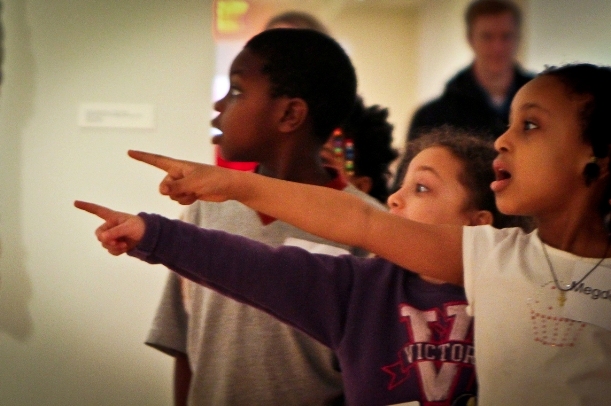 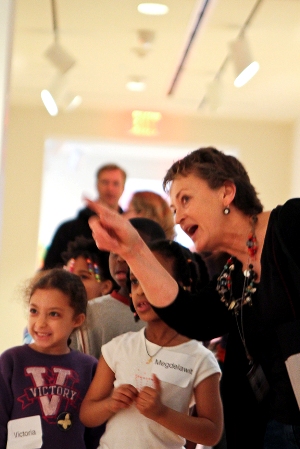 First graders from the Inspired Teaching Public Charter School visited the museum last week as part of their year-long partnership with The Phillips Collection. The newly opened Inspired Teaching school is in its first year and is creating arts integration projects that will be exhibited in the museum as part of the Phillips’s Art Links to Literacy Program. On this visit students viewed Elizabeth Murray’s Sun and Moon, Jacob Lawrence’s The Migration Series, and then created Lawrence-inspired collages in the museum’s art workshop. Elizabeth Murray’s The Sun and the Moon presents such powerful explosion of colors, lines, forms, and energy that I must have looked at it ten times before I noticed the orange cat in the lower-right. Once I saw him, however, he seemed right at home in a painting I read as balancing opposing forces: illness/health, light/dark, music/cacophony, the sun/the moon. He’s a cartoony looking cat, and I’ve often wondered is he meowing in pain or play?

Lucky for me, my colleague Sarah knows Cabell Tomlinson, who worked for Murray while she painted The Sun and the Moon. Tomlinson told me that the cat was Murray’s tabby Tiger, who she remembers as a sweet old cat who was “kinda creaky” with a “pitiful” meow.  While Murray was working on The Sun and the Moon she put Tiger to sleep, and the next week, she memorialized him in the painting–meow and all. Tiger wasn’t Murray’s only pet; she also owned a Burmese mountain dog named Otis and another cat named Armstrong. In fact, you can see all three pets in Murray’s Art:21 video as she sits and reads the paper (see chapter 10 of the full-length video).

A number of other animals appear in Murray’s body of work, including snakes, worms, and dogs. I’ve even read that she used empty Nutro cat food cans to mix and thin paints.

If you’re interested in more animals in the collection, check out my first Petting Zoo post on Duncan and Marjorie Phillips and their poodles.