135 participants of all ages

The Phillips’s first-ever Lego challenge was a great success! The tables in the Main Gallery were packed all night with Phillips after 5 guests who built their own Per Kirkeby-inspired masterpieces. Visitors snapped photos of their creations with Instagram and tagged their pictures #PhillipsPlaysWell, in honor of Lego’s Danish roots, for a chance to win prizes. Check out winning photos below, and find the rest of the submissions @phillipscollection on Instagram. The winning photos. Clockwise from top left: Windy Tree by Andrew M., Fallen Tree III by cerin, Untitled by ianjannetta, Untitled by mrsmerkel, New Shadows by Jessica, Sans Titre by Chris Z., and On the Floor by matthewbaileyseigel. 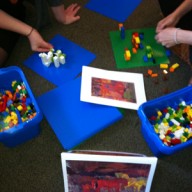