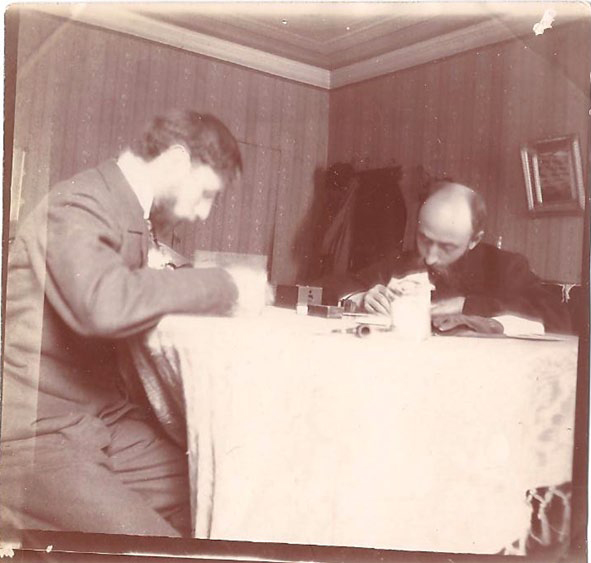 The biggest idea that I took away from our staff tour of Snapshot: Painters and Photography, Bonnard to Vuillard, was how experimental, private, and exciting the medium of photography was for these artists. They were not photographers, they were painters. They were men with a passion for visual exploration, enchanted by this easy, instantaneous little device, the snapshot camera. They brought cameras into their homes, took them on trips to the beach, set them on tables in restaurants. They took photos of their children sleeping, their lovers’ gazes, themselves reflected in mirrors, their bustling cities. These images were visual diaries of a sort, little notes about the light of the day, the activities, the emotions. They were never exhibited, occasionally traded, often collected in boxes with letters and other keepsakes. This show brings viewers into the  life of these seven artists, not just with their intimacy, but with the feeling that these memories could belong to any of us.

Over the summer, I presented a gallery talk on a series of 12 works by Augustus Vincent Tack, commissioned by Duncan Phillips in 1928. It is currently reinstalled in the wood-paneled Music Room, for which it was originally created.  Below are excerpts from the discussion. Join me on December 15 at 6:30 pm for the next in our series of Director’s Perspectives, this time on work by Joseph Marioni.

Duncan Phillips and Augustus Vincent Tack met in 1914 and developed a deep and enduring friendship. Painter and patron had a lot in common:  both were born in Pittsburgh and both had deep ties to Yale. Tack played an important role in fostering Duncan Phillips’s appreciation of the power and beauty of modern art.

The Phillips Collection owns seventy-five Tack paintings. “Tack” never became a household name. Whether Tack was fashionable was not the point. Duncan Phillips was passionately engaged in supporting emerging American artists alongside Europeans. The project was never about a suite of trophies, but about getting to know the artist and collecting his work in depth. END_OF_DOCUMENT_TOKEN_TO_BE_REPLACED

Pierre Bonnard is another artist in the collection who loved twilight, which he called l’heure bleue. Like Kandinsky, his work approached abstraction but did not let go of the visible world.

Bonnard’s sensitivity to the ways in which colors changed throughout the day was manifest in a letter to Matisse, in which he wrote about Matisse’s painting L’Asie (Asia), which the artist had lent him, “the red there is wonderful late in the afternoon. By day it is the blue that takes the lead. What an intense life the colors have, and how they vary with the light.”

The Palm and Twilight: Purkinje shift

Under conditions of reduced light, the violet figure in The Palm (above) has a spectral appearance and seems to come forward in the space. As light fades, vision shifts from the foveal cones, which are responsive to long wave yellows and reds that compose the daylight, to the peripheral rods. In twilight, short wave colors like mauve and blue increase in brightness and visibility relative to long wave colors. This phenomenon is called the Purkinje shift.