In my previous blog post, I discussed how photographer John Edmonds transforms traditionally objectified representations of Black people into more empowering and realistic representations. Indigenous peoples have also historically suffered the indignity of objectification. Here, with Ricky Maynard’s photograph of Gladys Wik Elder, we have an example of a powerful memorial to an Indigenous person, Gladys Tybingoompa (1946-2006), who spent her life fighting for equal land ownership for the Wik people in Cape York Queensland, Australia. 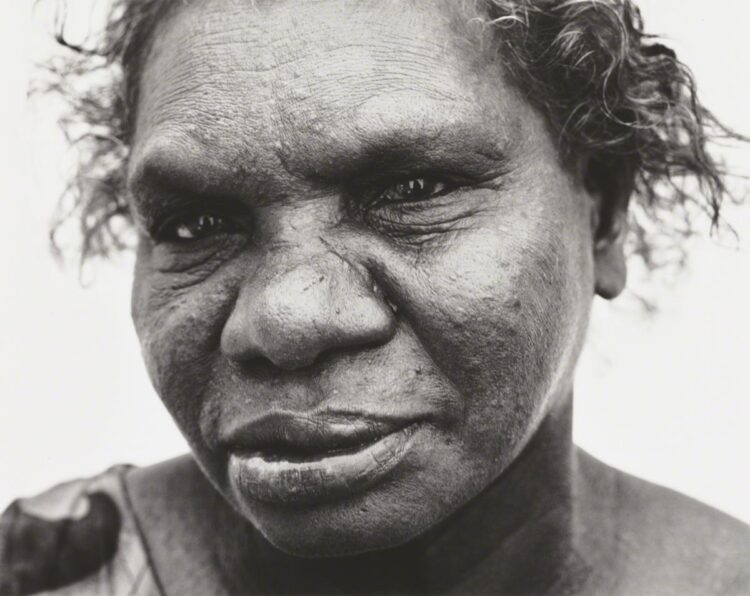 Ricky Maynard, Gladys Wik Elder (from Returning to Places That Name Us), 2000, Pigment print on paper, 12 x 16 in., The Phillips Collection, Museum Acquisition, 2017

This photographic portrait was acquired by The Phillips Collection as part of an effort to present a more diverse, inclusive, and globalized perspective of photography. Photography is an important aspect of the collection, originating with Duncan Phillips’s relationship with Alfred Stieglitz. Phillips said Stieglitz had mastered the medium and inspired the museum to continue to expand its photography collection over the years.

Ricky Maynard, an Indigenous Tasmanian artist, created the photographic series Returning to Places that Name Us in 2000. This portrait of Gladys is one of five Wik Elders portraits that Maynard created for the series to bring attention to the Wik Decision—not just as a matter of current concern, but something that held broader importance for the entire country and its colonial history. The Wik struggle became known as the Wik Decision, or Wik Peoples v. Queensland of 1996, in which the High Court of Australia determined that people who were leasing pastoral land from the government were not the exclusive owners of that land. The court held that the same land also belonged to the Indigenous population. That was a great achievement. However, it was short lived, and soon the Native Title Act, which had given Indigenous populations ownership of land, was modified in favor of government owners and leasers of land. This made it more difficult for Indigenous people to claim land ownership. 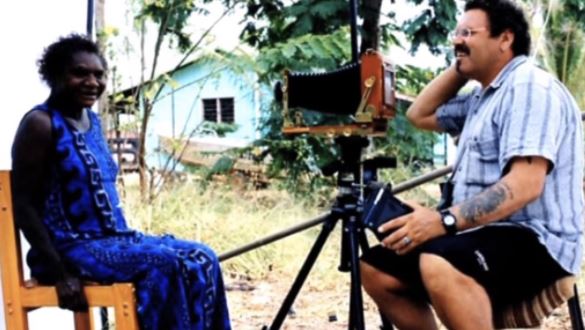 Gladys sat for her portrait in Maynard’s backyard. The portrait shows a close-up view of Gladys, emphasizing heightened emotion in her expression. Viewers can even see her crack a smile as she poses for the camera. This smile evokes her full-of-life personality; Gladys famously danced outside of the Australian High Court on the day the court handed down its decision that Indigenous communities should have jurisdiction over their own land. Maynard said this series transformed his photographic practice, stating: “I saw every picture. I looked into the faces of all those Aboriginal people and it was sad. I started questioning the photographer’s role. It changed my life and the way I viewed pictures.”

Curator Hetti Perkins from the Art Gallery of New South Wales in Australia describes how the texture of Gladys’s face reflects her peoples’ history and their perseverance on the quest for equality. To me, the complex topography of the Wik people’s land becomes visible to the viewer precisely because of Maynard’s proximity to her facial features. As discussed by Perkins and captured by Maynard, Gladys’s face provides us with a map of the privations, confiscations, and battles fought on this journey. By highlighting the geographical topography on Gladys’s face, the photograph reveals the indistinguishable connection between Gladys and her ancestral land.

This portrait of Gladys Tybingoompa teaches us how much we can learn about a person and their history from a close-up portrait. If you were to get your portrait taken, what would you want people to know about you?

The Phillips is hosting a book club about The Vanishing Half by Brit Bennett on February 18. Kayleigh Bryant-Greenwell, a Washington, DC-based museum equity strategist, who will be leading the discussion, shares some insights about the book. 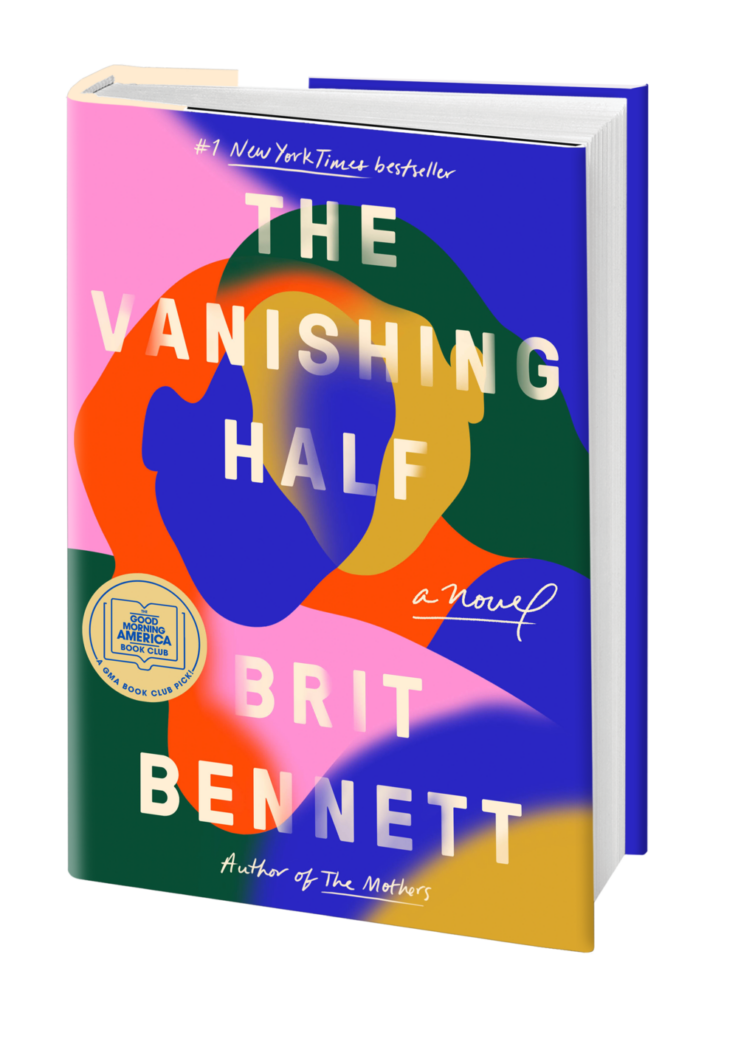 The Vanishing Half by Brit Bennett

There are only two places I’ve ever traveled that left me with an overwhelming down-to-the-bone sense of Place with a capital “P”: London and Vancouver, BC. I visited these iconic destinations on vacation with my husband over the course of our relationship, first visiting London when we were dating. London had such an effect on me as a place—a place that felt entirely enveloping in its character and cadence—that I, we, took the city as the middle name for our first born child. I say all this while reviewing Brit Bennett’s critically-acclaimed masterpiece The Vanishing Half because as a person who has experienced the totalizing power of place, I came to this story, described by critics as traversing time, place, and identity, with certain expectations. And I’m glad to say that not a one of them was met.

With such emphasis on place, I expected to be met with a bevy of John Steinbeck and Cormack McCarthy rambling prose describing the look and feel of place in creative but painstaking detail. I am still trying to reconcile why I would ever think that the prose of lauded White male authors would enter into the creative space of a brilliant Black woman writer, but that also holds poignancy to the ethos of the book: racial politics and the biases we hold. To my great surprise and delight Bennett offers a different mechanism of experiencing place. The places traversed throughout the story are done so through the lens of racial experience, its disparities and its inequities. The mysterious town of Mallard is only expressed through the attitudes and exploits of colorism. Los Angeles of the late ‘60s through the early ‘80s is a dilapidated apartment in Koreatown, a beloved gay bar with a raucous weekend drag show, a mildewed performing arts theater, a suburban cul-de-sac reluctant to desegregate. New Orleans is the loneliest city in the world after your twin abandons you and your slum-dwelling existence.

This profound singularity of creating place has me rethinking my experiences of London and Vancouver. All good books challenge our thinking and what we’ve always held as truth. Could it be that the joy I experienced in these places had little to do with the places themselves and more to do with how I observed racial politics therein? As a Black woman travelling with an ambiguously brown (and actually half-Taiwanese) man, probably yes.

This book meets the cultural moment at a critical time. In the past few years antiracist reading lists have multiplied in demand. For someone looking for more fiction to consider (often these reading lists are populated with nonfiction) I would recommend this. It feels too cliche to say a book has changed my life. But I’ve been holding this reading that outlines the explicitly and inseparable union of place and identity as closely as I do Black Lives Matter co-founder Patrisee Cullors’ memoir When They Call You a Terrorist, which does much of the same (and more of course).

I first picked up this book in October, having been lent it by a friend who really enjoyed it. I read the first few pages, not even the whole first chapter, and immediately put it down, not returning to it until late January when the Phillips asked if I would host the book club. I thought I would give it another try. In October I was metaphorically knocked out by the immediate opening into colorism, specifically the politicking of a little Black girl’s beauty—and by association her entire worth. It made me dizzy. I am a mother of two daughters. One is White passing, one is a carbon copy of myself down to the caramel skin and dark wavy hair.

I bring my own personal details into this review because 1) I had a profoundly personal experience of this book that I think may be shared among many readers and 2) I can personally attest that colorism is still as relevant an issue today across the country as it was in 1968 Deep South. Families are still harmed by social expectations of race and racial familiarity. For this reason I hope that readers do not consider this masterful American story a perfect time capsule, but an illustration, and a caution, in the spirit of this very moment.

Kayleigh Bryant-Greenwell (@KayleighBinDC) is a Washington, DC-based museum equity strategist. As Head of Public Programs with the Smithsonian American Art Museum and the Renwick Gallery she is responsible for an extensive calendar of programs across two museums, leading new outreach and inclusion initiatives towards developing new audiences and cultivating public engagement. In 2020 she worked with the Smithsonian’s Anacostia Community Museum to develop a new initiative on race and community. Additionally she participates in the Museum As Site for Social Action and Empathetic Museum movements. She serves on the Board of Washington Project for the Arts and previously served as the DC Chapter Co-Chair of ArtTable. 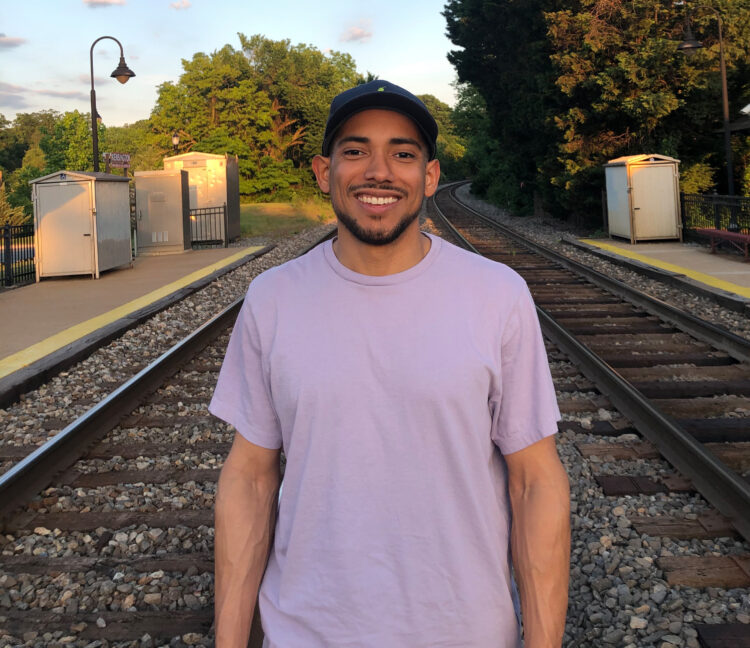 Why are you interested in working at a museum?
I am a painter, multimedia artist, and Maryland native. I’m currently a resident artist at Red Dirt Studios in Mt. Rainer. I earned my BFA at Morgan State University. It was there through a community art partnership that I got my introduction to creating public artwork. I participated in planning and completing murals across Baltimore City Public Schools (BCPS). I have exhibited my paintings and sculpture in group and solo shows throughout Baltimore City. I continue creatively engaging with the community in the DMV by organizing and hosting painting events and color workshops.

My grandmother was the first artist I ever knew; a painter and a poet. Early on, she recognized my artistic abilities and encouraged me to develop my skill. She instilled in me that knowledge is power, and inspired me to be a professional in my field. Her pastel portraits with ancient-Egyptian themes are the earliest paintings I remember seeing as a child. I dreamed of reaching her ability in portraiture and shading. Her paintings held stories of rich experiences, brought to life with gold leaf and bright colors. They also conveyed the beauty of brown skin tones set against mysterious dark backgrounds.

What brought you to The Phillips Collection?
I was captivated the first time I attended Phillips after 5. Experiencing the collection of artwork in a warm, casual setting felt more like a friend’s housewarming party than a night at a museum. I loved the way the community was invited and engaged with one another. A few short months later, I had the opportunity to virtually host my own color workshop at Phillips after 5.

Please tell us about your work at the Phillips over the fall, and the projects that you will be working on during your fellowship. What do you hope to accomplish during your fellowship?
As a Sherman Fairchild fellow for 2020-21, and member of the Community Engagement team, onboarding into the virtual workplace has been an exciting journey. My focus has been bringing about professional development opportunities that bridge entry-level positions in the museum into administrative roles.

I am currently working with my colleagues on reimagining our centennial year’s staff show in new digital forms.  One of the goals of this new staff show is to bolster relationships between Museum Assistants and administrative staff. I am also playing a role in the design of a public artwork memorial in partnership with the Black Coalition Against Covid to honor the lives lost in DC to the pandemic.

What is your favorite painting/artist here?
Sam Giliam’s April painting is the first to come to mind. It has a resemblance to a painting I did before I saw it. The similarity in color palette and shape convey related language, which inspires me to continue the conversation in my own work.

If you were to describe the Phillips in one word, what would that word be?
Exuberant

What is a fun fact about you?
Next to the visual art world, BMX-bike riding is another creative outlet that invigorates me. Skateboarding and car culture had large influences on me growing up. Each of these interwoven communities creates such progressive competition, and brings color to my life.