Alison Kysia, a member of Red Dirt Studio, reflects on the importance of creativity and communication.

A couple weeks after the shutdown due to covid-19, I was talking to a good friend who I nicknamed the oracle because of her consistent ability to say exactly what I need to hear. When I told her how disconnected I felt from the rituals and people that give my life meaning, she replied, “Do something you have been putting off. You know what it is. Do it today.” I immediately thought of Red Dirt Studio.

As a Muslim educator, I have written curricula and taught extensively about Islamophobia. I began to wonder how I could use art, including my 10 years of ceramics practice, to transform consciousness about the 9/11 era and amplify the experiences of impacted communities, particularly as we approach the 20th anniversary of 9/11 in 2021. I needed an art community to support my exploration, which is no small feat considering where I live. The Washington, DC, Beltway is dominated by institutions committed to the demonization of Muslims, like the US military, CIA, FBI, and Homeland Security. The hypernationalistic perspectives that inform these institutions are embodied by many people who populate and police cultural spaces here, resulting in some disheartening experiences. When I shared my frustration with artists and instructors sympathetic to my goals, I repeatedly heard the same advice—go to Red Dirt—making the oracle’s counsel that much clearer.

Red Dirt Studio in Mt. Rainier, Maryland, was founded in 1996 by Margaret Boozer, an accomplished ceramicist who started the multidisciplinary incubator as a result of her own disillusioning experiences in the art world. I called her, shared my intentions, and she enthusiastically invited me to join the studio and weekly two-hour seminar where residents discuss whatever it is they need to move their work forward. I finally felt like I was making progress. Except that we were in the covid shutdown and the studio was closed.

Like everyone else, we moved online. Another resident offered to pair artists for weekly meetings to fuel our creative process despite all the unforeseen challenges. I was matched with Diana Baird N’Diaye, an anthropologist, artist, and curator at Smithsonian Folklife Center and expert on African and African American dress as manifestations of diverse cultural expression. The first time we spoke, we immediately connected as two Muslim intellectuals who have complex relationships with our faith, family, career, and desire to create. Despite all the uncertainty of the pandemic, Diana—and the larger Red Dirt community—became sources of great empowerment. 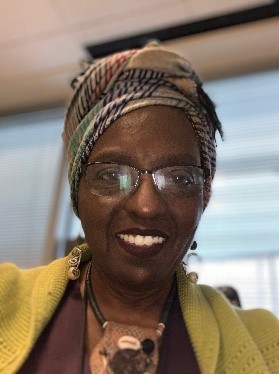 Soon after Diana and I met, someone I love passed on after a long illness. Due to the pandemic, I was again faced with an inability to access the rituals that give my life meaning. As an artist who works with textiles, Diana has long made amulets inspired by her family’s Senegalese Muslim traditions and suggested I make one to hold my powerful memories. The design of my amulet was based on the community from which my loved one originated, the Druze, a little-known faith rooted in Islam and founded in the Fatimid Ismaili caliphate that ruled Egypt from 909-1171CE. Our dialogue about amulets further deepened the connection between us. Even though we both identify as Muslim, our experiences are distinct, reaffirming a beautiful Quranic verse (49:13): “O humanity, we created you from a single man and single woman and made you into peoples and tribes so that you may know one another.”

In the midst of suffering all around us, we wondered how others might benefit from the healing power of our conversation. Through a collaboration between Red Dirt and The Phillips Collection, we offered an amulet making workshop on July 25. Seeing as the event sold out, the topic clearly resonated. After describing the story of how Diana and I met and the process of creating our amulets, participants shared deeply intimate stories about the people who inspired their amulet design. As one participant aptly commented, “I never thought we could have this kind of connection over Zoom.” The Red Dirt community, my friendship with Diana, and the workshop participants all remind me that in times of great need, it is the act of creation coupled with nurturing relationships that truly give life meaning. 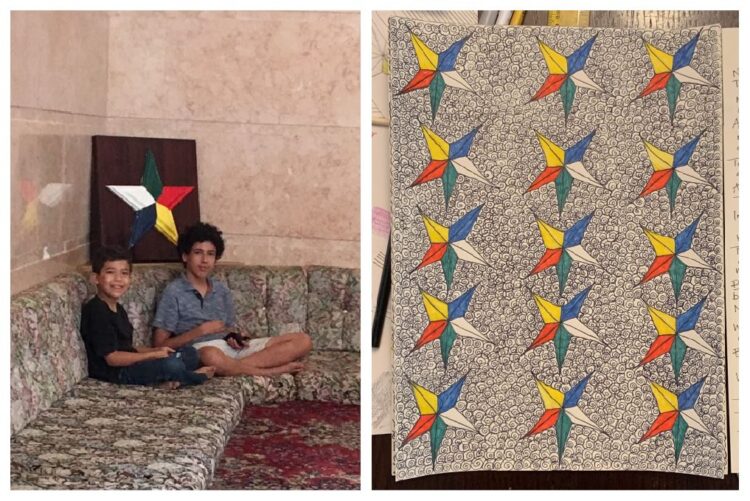 Photo of my children at the Druze shrine of Prophet Job in Lebanon. I used the star in my amulet design, which symbolizes the five limits (khams hudud): green/aql/mind; red/nafs/soul; yellow/kalima/word; blue/sabiq/precedent; white/tali/future. The swirls on the amulet design were made in three rotations while repeating the phrase that opens all but one of the Quranic chapters: bismillah al-rahman al-rahim/In the name of God, the Beneficent, the Merciful. 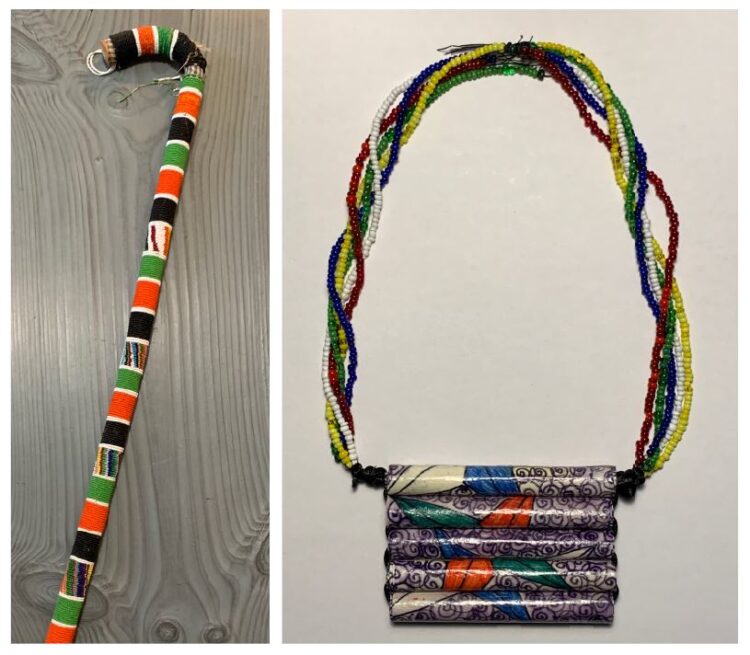 I made paper beads out of the drawing and used beads from my loved one’s walking stick (pictured at left, which the inspirer of my amulet received while teaching in Kenya 50 years ago) to complete the amulet (pictured at right).