Antony Gormley didn’t set out to be an artist, but over the years, he realized that’s what he is. “I play around with things and see what happens,” Gormley says in Just Trial and Error: Conversations on Consciousness, a documentary by British filmmaker Alex Gabbay. 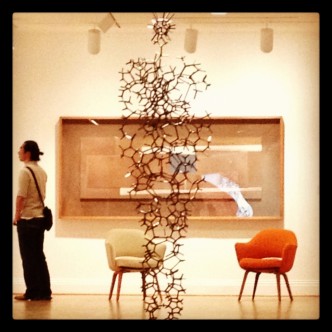 That sense of playful experimentation is evident in the drawings and sculptures in Antony Gormley: Drawing Space, currently on view at The Phillips Collection in Washington. The show marks the first large-scale exhibition of the British artist’s drawings in the U.S. My colleague Alicia Dillon previewed the exhibition earlier this summer, but last Thursday I returned to take a closer look and lead our Twitter followers on a virtual tour, including a few pieces of trivia that Gormley shared with the museum staff when he was in town for the exhibition’s opening.

After the Twitter tour, we partnered with The Phillips Collection for a screening of Just Trial and Error, which unpacks the meaning of perception through interviews with Gormley, an internet entrepreneur, a perceptual neuroscientist, and a cognitive neuroscientist. Director Alex Gabbay joined us via Skype to answer questions from the audience after the film and explained that the documentary was inspired by a unique 2009 exhibition at UCL on consciousness.

As Gabbay tackled deep questions from the audience about perception, the internet, narrative, and where they all intersect in this media-saturated society, he may have left us with more questions than answers.

But for an artist, that may very well be the sign of a job well done.

Watch the trailer for the film below, and take our Twitter tour of Antony Gormley: Drawing Space.