Gerry Hendershot, a former Phillips volunteer, shares some contributions from a poetry and art class he organized at American University’s Osher Lifelong Learning Institute. We hope this holiday weekend you will be able to take a moment to relax, reflect, and enjoy some art and poetry. Happy Thanksgiving! 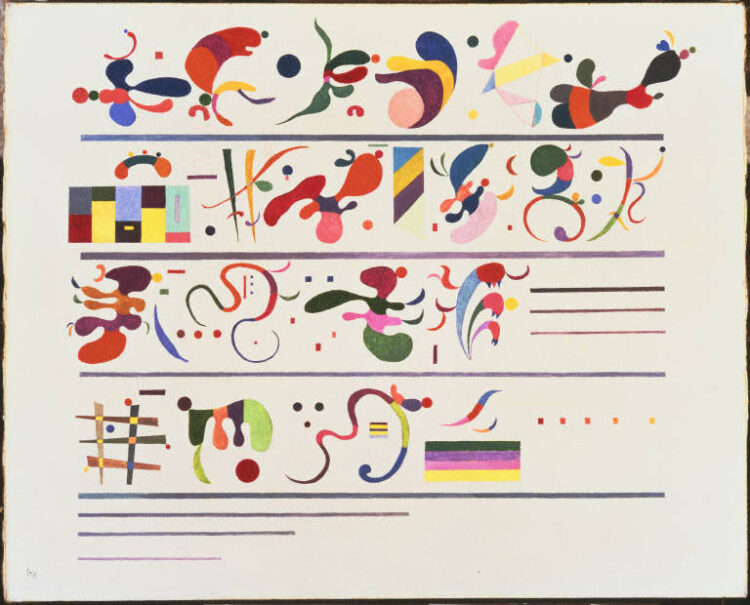 This poem inspired by Kandinsky’s painting was composed in a study group for retirees at American University in the Osher Lifelong Learning Institute (OLLI). As the organizer of the course and a former art information volunteer at the Phillips, I knew that I wanted to include some of my favorite Phillips artworks, like Succession and Luncheon of the Boating Party.

“Great Poems about Great Paintings” brought together ten retirees on Zoom to discuss paintings and compose poems about them.  We read classic ekphrastic poems such as W.H. Auden’s Musée des Beaux Arts after Breughel’s Fall of Icarus, and Anne Sexton’s The Starry Night after the Van Gogh painting. About fifty paintings and poems were included in the 8-week course.

I invited Donna Jonte, Manager of Art and Wellness & Family Programs, to introduce and moderate discussions of selected works from The Phillips Collection. Participants were especially intrigued by Whitfield Lovell’s assemblage Kin XXXV (Glory in the Flower) and had a lively discussion not only about the idea of time, but also about objects in our lives that embody our history, struggles, and triumphs.

Here are the last lines of M.W. Poole’s poem:

Mostly sixty years gone
Those forlorn eyes implore
When “Free at Last?”
The Glory in the Flower
Fading with the fleeting hour

Cathy Pastor’s poem, in haiku form: is titled “Time’s Up”:

Nearly 10:30
An unimportant minute
No one recalls death 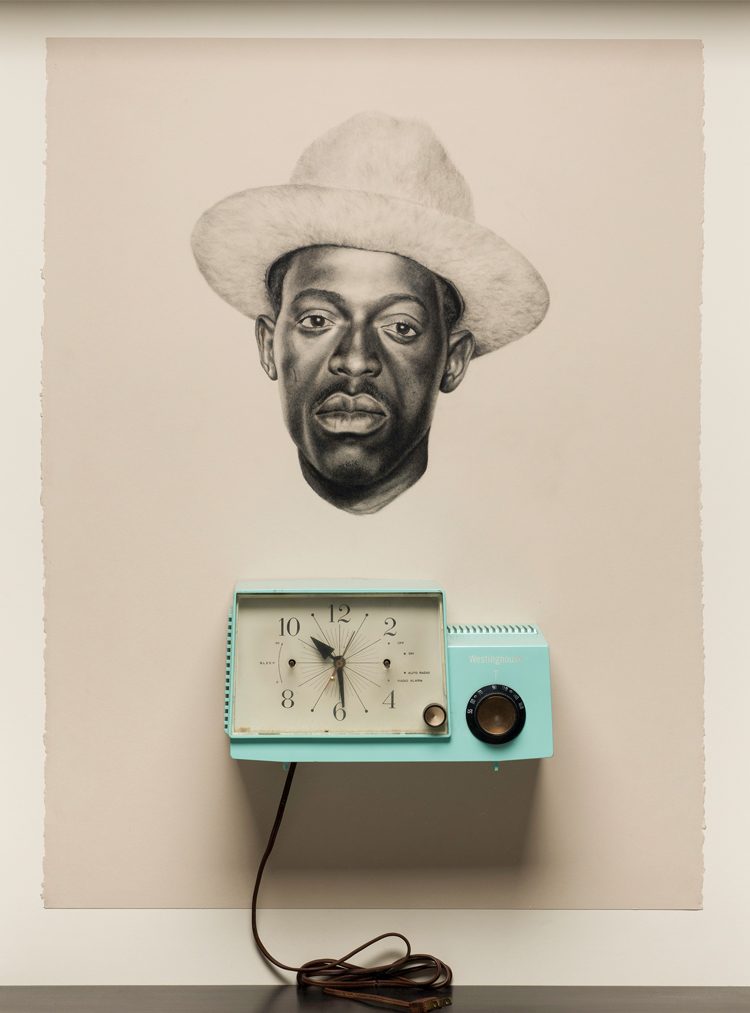 Another of Cathy’s haikus responds to Matisse’s Interior with Egyptian Curtain: 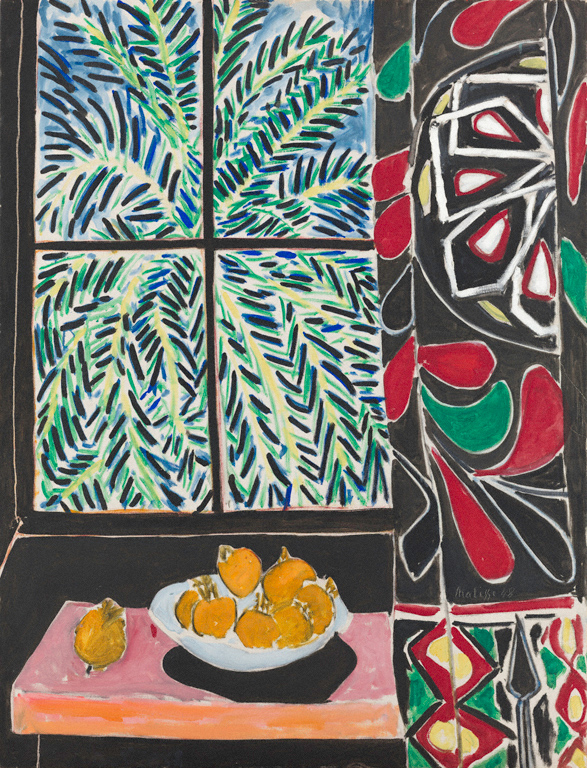 When I gave students the option of writing about other paintings from the Phillips, Poole chose Degas’s Melancholy. Imagining that the woman is pondering the recent presidential election, Poole voices the woman’s concerns:

Will this election season never end?
My shattered nerves crave some respite.
What policies will our divisions mend?
Through peaceful protest or a fight? 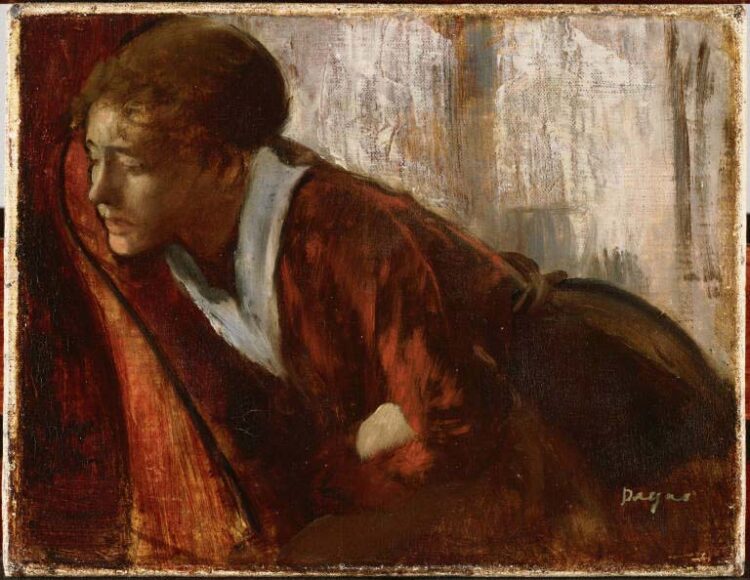 Rosenbaum wrote about The Migration Series, Panel No. 1 by Jacob Lawrence, focusing on a child waiting with her mother to board a northbound train:

Follow
Mama
in her best
green coat
with big buttons.

Hold tight
to the
red trimmed suitcase
with all we own. 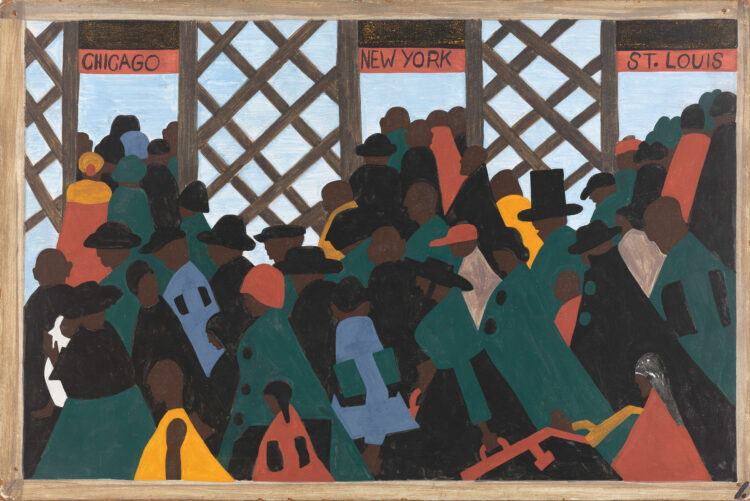 Jacob Lawrence, The Migration Series, Panel no. 1: During World War I there was a great migration north by southern African Americans., 1940-41, Casein tempera on hardboard 12 x 18 in.; The Phillips Collection, Acquired 1942

I began the course by showing Luncheon of the Boating Party and illustrating different viewpoints for writing poetry about it―people in the painting, people in the gallery, or a personal memory. To illustrate these viewpoints, I read three sonnets that I wrote after 15 years of observing Boating Party as a volunteer. Here are the opening and closing lines from one of those sonnets:

The parties in grad school were never like that,
I thought, while admiring the Phillip’s Renoir.
Our clothes ‘sixties casual, when friends picnicked at
the park with the Point on Lake Michigan’s shore.

That luncheon party over-looking the Seine
was lost in translation on Lake Michigan. 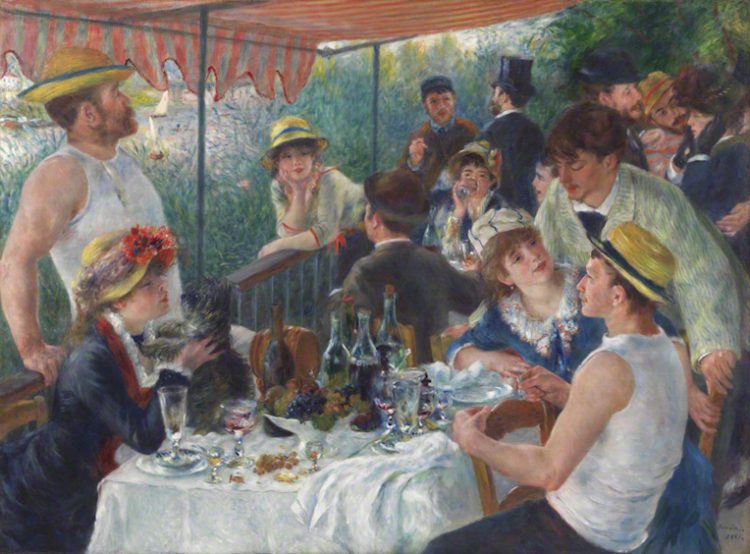 Most study group members had no previous experience writing poetry, and some were at first intimidated, but all did write. They came to trust their peers and felt comfortable taking chances. The link to the Phillips was important, they said, because they could look forward to seeing in-person the art they discussed and wrote about. Indeed, several have visited the Phillips since its re-opening.

There are many ways to enjoy art at The Phillips Collection, of course, and the OLLI experience adds paintings-and-poetry via Zoom to the mix.

Gerry Hendershot volunteered at The Phillips Collection from 2002 to 2017, greeting guests and answering their questions about the Collection. He retired from the Centers for Disease Prevention and Control after 25 years of government service in 2001, and now writes and promotes poetry from his home in University Park, Maryland. He has organized and led two OLLI courses and frequently leads community poetry discussions. For more information about OLLI, visit https://www.olli-dc.org/ To contact Gerry Hendershot: ghendershot@earthlink.net