2021-22 Sherman Fairchild Fellow Shiloah Coley speaks with author, advocate, and survivor Hagir Elsheikh, whose portrait is featured in Portraits of Resilience at Phillips@THEARC (on view through July 29). 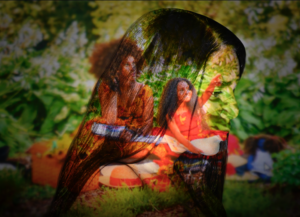 Hagir Elsheikh chose an image of her daughters to be projected onto her portrait taken by Jonathan Banks as part of the ongoing photo series Portraits of Resilience. The photo series features images of survivors of torture from around the world who fled their home countries seeking safety, recovery, and political asylum.

The war in Ukraine draws attention from people all around the world with approximately 8 million people being internally displaced, and 6.5 million fleeing to seek refuge in other countries, according to the UN Refugee Agency. Yet refugees from the Global South fleeing humanitarian crises have not been met with nearly the same response as their Ukrainian counterparts. Prior to the war in Ukraine, 68 percent of people forcibly displaced worldwide came from just five countries—Syria, Venezuela, Afghanistan, South Sudan, and Myanmar—according to the UNHCR Global Trends 2020.

The girls sit, smiling, surrounded by an abundance of greenery in the photograph. Their mother grew up in a much more arid environment with seemingly never-ending expanses of sand that nearly touch the sky at the horizon. Hagir wouldn’t arrive in the US, the place her daughters now call home, until 2001. 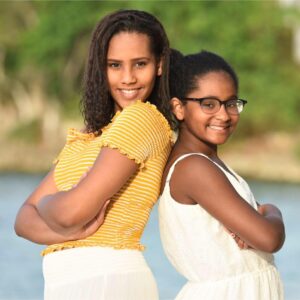 Hagir grew up during a time when women were often treated as second class citizens in Sudan, in part, reinforced by Sharia Islamic law, which formally began in 1983. The Islamic code restricted the rights of women. What does she tell her daughters about her life and upbringing in Sudan? “Everything, everything,” said Elsheikh. For every stage of her childrens’ lives she communicates part of her own story. In reference to her eldest daughter, Hagir said, “Every stage of her life, she knew what it was like for me at that age and how it is now for kids in Sudan at that age.”

Elsheikh wrote about her experience as part of Portraits of Resilience: “I was one of a few women activists who spoke publicly for the Democratic forefront. I experienced what happens in the infamous ‘Ghost Houses’ of Sudan, where brutality and murder are commonplace. I fought for women and human rights which meant that I was often detained and beaten. I was only a girl when Bashir’s security forces hung me from a tree and beat me for 10 hours, then left my bloody body in front of my home. During college, I continued to be detained and tortured until my head was cracked open with a metal bar by the government militia.”

Since immigrating to the U.S. in 2001, Hagir has relentlessly shared her story with the hopes of improving the lives of Sudanese people and women who have suffered human rights atrocities and domestic violence abroad and in the U.S. She is now a successful business owner, talk show host, board member of multiple nonprofits, and continues to be an advocate and activist for women’s rights through her nonprofit, Tomorrow’s Smile, Inc. But it’s not the titles or accomplishments that define success for Hagir.

“Did I make someone happy today? Did I help someone? Did I make a difference? Did everything bad that happened to me make it better for someone else?” asks Hagir. “And if the answer is yes, then I’m good. If the answer is no, I’m going to look and see what can I do? What more can I do?”

While adapting to life in the U.S. Hagir found herself navigating the challenges and violence of an abusive relationship. The persecution and violence she has faced in both her native country and once she immigrated to the U.S. inspired her to start Tomorrow’s Smile, Inc., which assists mostly Arab-speaking immigrants who are victims of domestic violence. 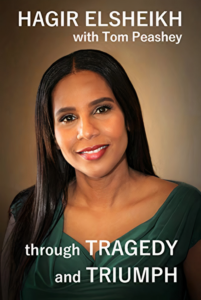 The cover of Elsheikh’s autobiography Through Tragedy and Triumph: A Life Well Traveled, co-written with Tom Peasley

Hagir chronicled her story in her autobiography Through Tragedy and Triumph: A Life Well Traveled, co-written with Tom Peasley. As a woman who has overcome incredible feats, she’s still in search of herself. In the opening chapter, she tells the story of a little girl, a young Hagir, who is out wandering the desert in search of “where the blue sky meets the sand.”

Hagir’s book is available for purchase in the Phillips’s gift shop.